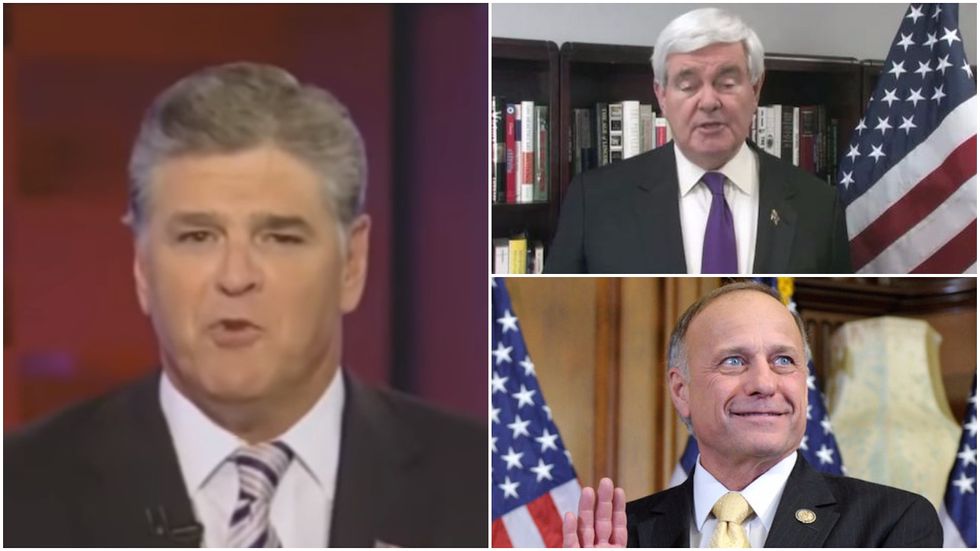 Would you like to read a 5,000 word roundup of wingnuts being awful about the terrible shooting incident that injured GOP Rep. Steve Scalise and several others? We thought not. For one thing, most people are being fairly decent. Oh, Alex Jones says yesterday was the beginning of a new civil war, but fuck him. The less you pay attention to him, the less he exists in our public discourse. (Ahem, MEGYN KELLY.) And honestly, we like seeing Congress act decently for once, though we're skeptical how long that will last. But for now, we don't mind watching Republicans like Senator John Thune and hot-ass Rep. Adam Kinzinger go on TV and talk about how members of Congress need to set an example for America by being nicer to each other. Hell, even Appalachian Trail Wanderer Rep. Mark Sanford said on TV that Donald Trump shares some of the blame! We seen it with our own eyes!

Instead, let's just focus on three Republican wingnuts who need to go fuck themselves, but in a CIVIL WAY, unless they like to fuck themselves in an uncivil way, not that there's anything wrong with that. We're not going to rank them, because that would require effort. Just think of this as Rub-A-Dub-Dub, Three Deplorables In A Tub.

Most of Newt's week has been consumed with shitting on Robert Mueller for doing a real investigation into Donald Trump, because Newtie has a bigger Cialis boner for Trump than he's ever had for a mistress he's about to run off with as soon as he serves divorce papers to whatever hospitalized woman he's currently married to. But he took some time to hop on Fox News and bitch about how this happened because Kathy Griffin. And Shakespeare plays. And Democratic CUSSERS:

It's part of a pattern [...] The intensity on the left is very real, whether it is ... a so-called comedian holding up the president's head in blood, or right here in New York City, a play that shows the president being assassinated, or it's Democratic leading national politicians who are so angry they ... have to use vulgarity ...

Even the Fox News hosts told him to fuck off, with one asking if he thinks he's being helpful, and should we maybe try to rise above the "threats" from cussers and Shakespeare and redheaded comedians? Newt's answer: "NO!" What a stupid, immature, malfunctioning snowflake fuckbaby, who coincidentally explained 30 years ago to Republicans to call Democrats "traitors" all the time if they want to win.

We're not sure if deplorable bigot Steve King was locked in the bathroom trying to squeeze out a cantaloupe-calf-sized shit yesterday while the rest of his Republican and Democratic colleagues were on the House floor holding hands and crying about how when one of their members is attacked, it's an attack on all of them, but we're going to guess the answer is PROBABLY. Here are his thoughts: