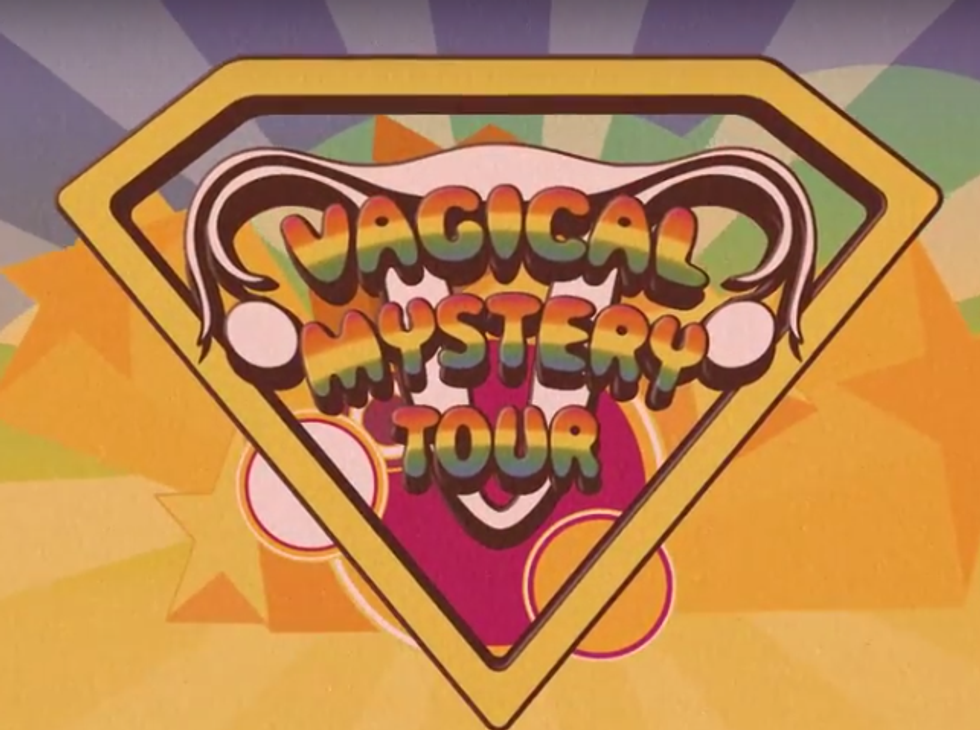 Hi Wonkers! We have a special EXCLUSIVE REPORT for you right now, one that is way better than whatever EXCLUSIVE REPORT James O'Keefe just came out with. For one thing, ours is not fake news! Wonkette sat down for a telephone chat with Lizz Winstead this week to talk about her current comedy tour, the "Vagical Mystery Tour." Get it? It's a vagina joke about the Beatles! Or it is a Beatles joke about vaginas! The Vagical Mystery Tour is a project of Lizz's organization, the Lady Parts Justice League, and the tour's website describes it as "The USO meets Habitat For Humanity for abortion clinics," which is exactly what it is.

If you're not familiar, Lizz Winstead co-created "The Daily Show" and Air America Radio, which is the first place we heard vaguely well-known people like Rachel Maddow. And now Lizz is doing this, because she is a person who DOES STUFF.

Winstead and her band of merry travelers are descending on cities around the South and the Midwest this summer and putting on comedy shows that seek to connect people (e.g. MAYBE YOU) with their local independent reproductive health providers, to give them (YOU) an easy way to help out, because those clinics are in danger these days, especially since Russian Agent Pussgrab's inauguration. While in these cities -- this is the Habitat for Humanity/USO part -- they're going directly into the clinics to meet staff, hear their stories, and just figure out what they can do to make their lives a little easier.

Here is a bit of our conversation with Winstead, edited way down both for clarity, and also because we yip-yapped a lot on the phone:

WONKETTE: HI! OK, so give us the elevator speech for the Lady Parts Justice League and the Vagical Mystery Tour.

LIZZ WINSTEAD: A whole bunch of comics and writers got sick of just going to fundraisers when this assault on reproductive rights and bodily autonomy got so great. It just seemed like "What is happening? I want to do more." At first we thought we would be like the Funny Or Die of feminism and reproductive access. Then we realized the videos weren't the end point, that was the starting point. So we made videos, got people riled up, and once people knew shit, they still didn't know what to do.

So we decided to have part of our work be on the ground, to do a couple of things: To bring clinics love and support in some really hostile spaces, to fix shit for them like a Habitat For Humanity for clinics, and then, through our shows, when you can gather people together for an evening of fun, but then you can do a conversation afterward with real talk with the people on the ground, it connects with the audience about what's ACTUALLY happening, and they can get a call to action right there. So we decided we wanted to do a full-blown tour, to bring national attention to local issues, and then the local folks can find out what they can do. So it's like: Come, laugh, hear about what's at stake, find out what you can do, and then sign up to do it.

WONKETTE: Tell us something that the average person on the street might not understand about what it's like to be the only clinic in a city (or a state!), and what the people who work there go through every day.

LIZZ WINSTEAD: I think people understand hostile protesters and things like that, but I think what's hard to connect with is what happens day in, day out, when you walk through a throng of people calling you a killer, then you do your work and patients are saying "Thank you, without you, I don't know what I would do." Then you walk back out of your job and people are screaming at you that you're the worst scum in your town. After a while, that builds up!

We set up an advance for the clinics' needs, because sometimes they need random things like gardening, or a fence has a hole in it, or they need bushes to keep protesters away. What happens is you plan that, then once you get there, they reveal so much more that they need. For example, a lot of these communities have large refugee populations, and those people need translators. Also, sometimes for some of these repairs they need, they can't get somebody to come out and do the work for a year, because nobody will come out and help the abortion clinic. So through our tour, for example, we got a handyman for the folks in Oklahoma City. We found somebody to update the website for the clinic in Jackson, Mississippi.

So much of it is getting people to ask, "What do I do in my normal life, that could benefit a clinic?" Even just bringing cupcakes for clinic workers. The morale-boosting part is HUGE.

Winstead talked about the need to stand up in front of these assholes who protest clinics, and shared the WHOA IF TRUE brilliant idea that clinic escorting really should be a paid job. (We agree!) She also said those protesting dicks are literally following them around on tour, because apparently they think the Vagical Mystery Tour is a traveling abortion circus:

LIZZ WINSTEAD: These bullies who stand up outside these clinics, they're following us around on tour with their bloody weird fetus signs. We're like, "We don't do abortions at our comedy shows. We probably would, but we don't. Get a job." We have the worst groupies.

If you go to one of their shows, maybe you can stand in front of those people (and point and laugh, like you people tend to do).

Finally, Winstead shared some advice, in response to our question about how people can keep from getting EXHAUSTED and OVERWHELMED in this age of Trump. There are assaults coming from all sides, whether it's healthcare or reproductive rights or immigration or climate change, and meanwhile, we have this meta story on top of it about Russia, which goes to the very legitimacy of this presidency.

LIZZ WINSTEAD: Identify what is the thing that wakes you up in the morning and keeps you up at night, and then figure out what's happening on a local level with that, then do two things. Let's say your issue is immigration. The people that issue affects, while all this shit is going on, those people still have to live in America every day. So how do I work to make my neighbors feel safe, and then how do I make sure to elect officials who will make sure that, as long as we have creepy people in federal government, that our state laws will make sense? If it's protecting your clinic, find out who your local clinic is. Let them know who you are, and let yourself be the person they ask for help, so you can gather a coalition to help them. IMPORTANT: Make sure the people you gather actually give a shit as much as you do.

WONKETTE: So you're not saying to ignore everything that's happening, but to laser focus in on what matters the most to YOU.

LIZZ WINSTEAD: Laser focus in, absolutely, because you will burn out and feel helpless if you don't. And identify the people working in the areas you might not be working in, and meet with them, so when a big piece of legislation comes along, you can all band together as a coalition to call those congressmen, demand repeal, whatever the issue is.

Finally, Winstead said what we really need for progressives is one of them prayer chain thingies all the evangelicals have, so we can all fly into action at the drop of a hat, like them evangelicals do. Oh and sign up for Daily Action and SwingLeft.

The Vagical Mystery Tour hits Chicago TONIGHT (June 27, The Metro), then they're off to St. Louis, Indianapolis, Detroit, Cleveland, Pittsburgh and Louisville in the coming days and weeks. All dates are right here, so if you're in one of those towns, bring your ass, get involved, and tell 'em yr Wonkette sent you.