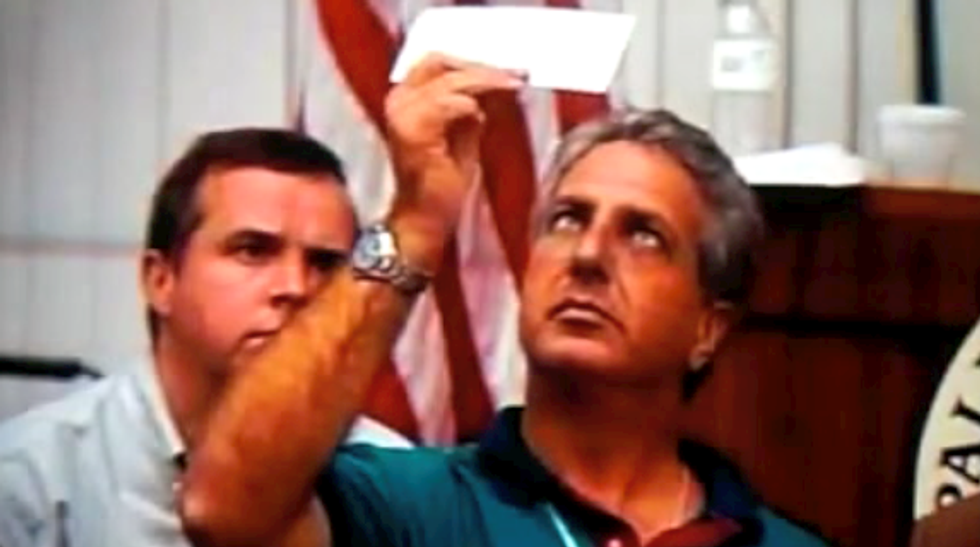 Wednesday was one long day of avoiding the news, Wonketteers, and we understand if you've been busy numbing your pain by shopping for shoes or guzzling dark-colored liquors, but we would be remiss if we didn't draw your attention to a few distant bits of flickering light, barely visible through the haze of unregulated coal emissions and hog farm waste pond fumes. In our wanderings in the ruins of this week's election results, we have found a few things intact to help you remember that you can and will feel Hope again.

Scott Brown, Non-Senator, Will Be Forever Haunted By The Great Pumpkin Riot

We had Fox News on here in the Washington Bureau on Election Night, so it took them a couple extra hours, but eventually even they called the New Hampshire Senate race for Jeanne Shaheen. Four percent isn't an insurmountable margin, so Scott Brown's got to be asking himself: what else could I have done? More donuts for the volunteers? Bigger lawn signs for the people who didn't want to do anything useful? Another sixer downed with the tailgaters?

Let us help you out there, Scott. We can tell you exactly where you went wrong. In Keene, New Hampshire, 10 days before the election, you had an opportunity to bravely lead when drunk pumpkin mobs ran wild, menacing the tax-paying residents of Keene all around the Pumpkin Festival where you were electioneering. You could have climbed on an overturned car to address the crowd as a statesman who also speaks fluent Bro and convinced the hooligans to take their beers and go back to Chad's porch and have a good time instead of throwing skateboards at the cops.

You could have been a hero, but instead you tucked your pumpkin under your arm and ran. The people of New Hampshire need a senator who will wade into the fray to protect the community and isn't just out to save his own gourd.

Minimum Wage Workers In Four States Will Get A Raise They Will Probably Blow On Food, Rent (Sorry, Illinois)

Minimum wage increases were passed by popular vote in Alaska, Arkansas, Nebraska, and South Dakota, enjoying margins that any political party would kill for. After years of talk from national Republicans, including wannabe presidents, about doing away with the minimum wage, voters came together across party lines to say that people who get paid less than anyone else deserve a raise.

Voters in Illinois tried to do the same, overwhelmingly endorsing a non-binding resolution to increase their minimum wage. To go into effect, it will require the passage of legislation complete with signature from the state's brand new Republican "CEO" governor, so we'll be watching for that to never happen for the next four years.

Two States and One "State" Freed the Weed (Sorry, Florida)

Despite a strong showing in Florida, medical marijuana came up just short of passage: as a constitutional amendment, it needed 60 percent and got 58, close enough to suggest that advocates will be back. Florida should try to take inspiration from Oregon, where voters managed to legalize recreational marijuana on the second try with some minor tweaks, like a cap of eight ounces per person rather than no limit at all.  In Alaska, where the governor's race is still too close to call at the time of this writing, voters approved a ballot question calling for a Marijuana Control Board to facilitate sales and regulation of pot by a comfortable 4 points.

In Washington, DC, 69 percent of voters approved marijuana legalization, following ordinances passed in recent years by the mayor and city council to allow for medical marijuana and to decriminalize minor possession. If it was a state, the District would be a pothead's paradise, but certain members of the House Republican Caucus have made it their business to derail DC laws they don't agree with, including recent changes to marijuana policy. We've never met these congressmen, who find themselves to the right of Rand Paul on this issue, since the districts they were actually elected to represent are quite a distance from Washington. We're looking forward to hearing these small-government conservatives argue in favor of federal intervention to nullify the actions of local government.

Technically, Republican Ed Gillespie hasn't lost either, since no winner has been declared yet. With 99.88 percent of precincts reporting on Wednesday evening, incumbent Democrat Mark Warner held a lead of seven-tenths of one percent, well outside of the margin where state law allows for a recount. Even if every single vote that remains uncounted goes in Gillespie's favor, it won't get him to the Recount Zone, so at this point we're just waiting for the concession speech. (We predict a fiery performance that suddenly grabs the national spotlight and a swift appointment as Senior Fellow following a bidding war among the right-wing think tanks.)

The recount lawyers for both parties in Virginia are expected to remain in their bio-pods, ready to be activated in a state that remains liable to break out in a recount at any moment.

So don't despair, Wonketteers -- the world is not all darkness and doom. There are even some reasons to believe access to reproductive health care won't be totally destroyed by our new Republican overlords. Voters in North Dakota and Colorado soundly rejected "personhood" measures to outlaw all abortion and many forms of birth control, so that's good! Also, the Senate's Jester-Elect Joni Ernst will personally provide you with free contraceptive measures, as long as you are a male pig.