Wonkette Would NEVER Cover NJ Senator Bob Menendez's Bribery Trial If He Were A Democrat! 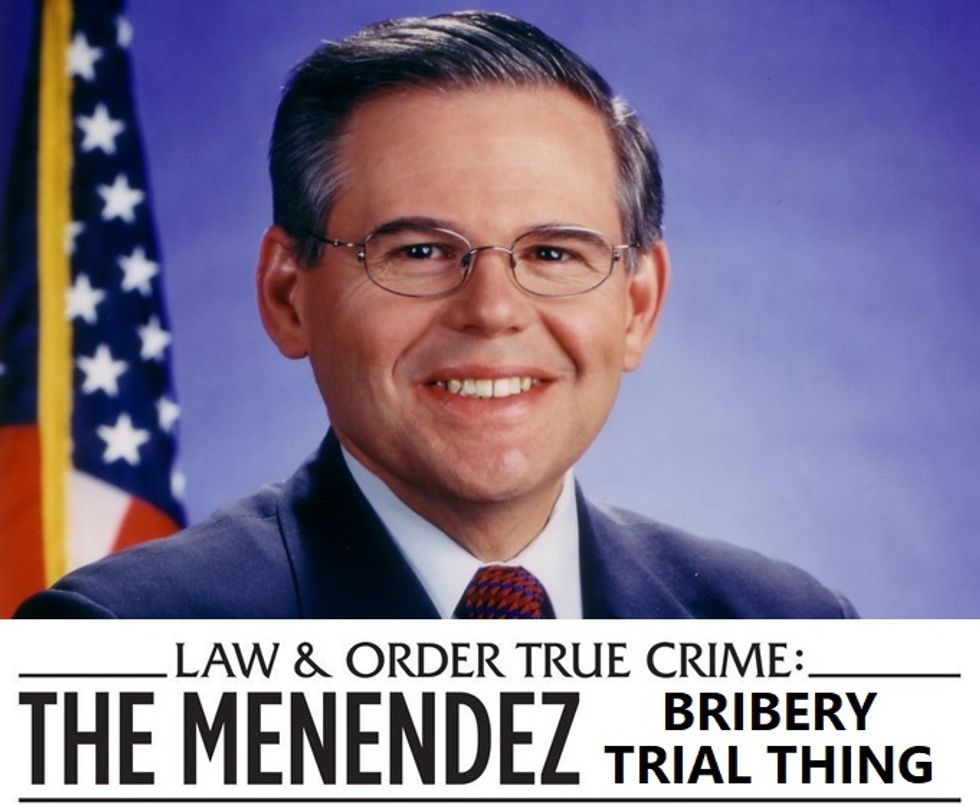 Coming soon to every third ad break during Maddow

Wow -- has it really been 36 years since a sitting U.S. senator has faced a bribery trial? We thought that politicians from New Jersey were required to be tried for fraud or bribery or something in order to prove their residency. But yes, today marks the start of a federal trial on bribery charges for New Jersey Democrat Bob Menendez and for Dr. Salomon Melgen, an ophthalmologist pal of Menendez's who lives in Florida along with his millions of dollars. Menendez is charged with pushing legislation and doing favors for Melgen in exchange for gifts of travel on Melgen's private jet, vacations and luxury hotels paid for by Melgen, and over $700,000 worth of donations from Melgen to various groups supporting Menendez's Senate campaigns. Menendez says he and Melgen and Melgen's money are just really good friends, and that there was no quid pro quo involved, because he would have supported legislation regardless of any contributions Melgen may have made.

CNN has a nice 'splainer of the major issues involved in the case: Prosecutors say Melgen exploited his friendship with Menendez with all sorts of inducements to get help with Melgen's business interests, including numerous vacations at a luxury villa in the Dominican Republic, plus the flights, which Menendez failed to report on federal disclosure forms. After those favors became public, Menendez paid Melgen $58,000 for the travel and said the failure to list them had been an inadvertent oopsie.

Melgen also tossed lots of money at Menendez's campaign, PACs that supported him, and Menendez's legal defense fund. (Menendez, you may recall, was the target of a fake "scandal" involving a hooker lady, who it later turned out had been paid to lie about doing the sexes to Menendez for money.)

In exchange for all the money and vacations, Menendez allegedly helped get the State Department to intervene on Melgen's behalf in a dispute between the Dominican government and an X-ray company Melgen owns. Prosecutors also accuse Menendez of enlisting the help of then-Majority Leader Harry Reid to push the Center for Medicare and Medicaid Services (CMS) to help Melgen avoid paying $8.9 million CMS claimed he'd overbilled the government. Menendez also helped a girlfriend of Melgen -- and her sister -- get tourist visas to the USA after their first application was turned down. Melgen and Menendez together face 18 counts of bribery and fraud; they've both pleaded not guilty. Menendez has predicted he'll be fully exonerated.

While the prosecution contends Menendez provided a "stream of benefits" in exchange for Melgen's gifts and contributions, Menendez's defense will argue that, following the unanimous Supreme Court decision last year that threw out the conviction of former Virginia governor Bob McDonnell, because the prosecution didn't prove that all the nice things McDonnell did for a vitamin-pushing pal were really "official acts." It's an important Constitutional issue that sort of puts us to sleep, and Menendez's legal team is clearly counting on the jury to snore softly enough that it will hear something about the McDonnell case, then wake with a start and shout "Not Guilty!"

Look, here is the legal analysis stuff from a real lawyer, from the New York Times:

“If they can make this seem like the Virginia governor’s case, that was McDonnell, that he’s just doing what we want a responsible politician to do, he’s creating opportunities for a friend – who parenthetically is not a constituent – that he’s being responsive, he’s opening a door, he’s providing opportunities, that can help,” explained Mala Ahuja Harker, a former federal prosecutor, in New Jersey. “The problem for the defense is that in this case the facts suggest that he went much further than that.”

For a f'rinstance, while McDonnell only introduced his moneyed vitamin powder friend to people who could help him, Menendez actually went to meetings and talked to heads of agencies on Melgen's behalf. The challenge for the prosecution, according to former federal fraud prosecutor Randall Eliason, who spoke to CNN, is

whether prosecutors can prove Menendez had a "corrupt intent" -- an aspect of the trial made more challenging given that Melgen has not agreed to testify against the senator.

"This is a traditional bribery case and it all comes down to proving corrupt intent," Eliason told CNN in an interview. "The easiest way to prove a quid pro quo is to get the other side to testify -- prosecutors don't have that here."

There are also some fun political sideshows to the Menendez trial, too, like whether Menendez, if he's found not guilty, can still win reelection in 2018 after all that bribery talk. But if Menendez is found guilty and has to leave the Senate, there'll be all sorts of drama over when he'd leave office, whether it's by resigning or being voted out by the Senate, and especially over who would get to appoint a replacement to serve out the remainder of his term. Chris Christie is grudgingly still pretending he's New Jersey's governor until January 2018, and he'd sure like to appoint a Republican, but the odds are good that a Democrat will be elected in November to replace Christie -- so would a convicted Menendez try to cling to his seat until a Democrat gets sworn in come January?

Be prepared for some drama. We already like the judge in the case, William H. Walls, whom the New York Times says admonished jurors during the selection process, "This is a serious case [...] It’s not a junky jeopardy matter that you see on TV in these supposed judge cases. This is real stuff." Walls also got snippy with a defense attorney today as opening arguments were delayed, criticizing the defense

for filing a motion on what to include in jury instructions at the end of the trial.

When attorney Abbe Lowell [yes, Jared Kushner lawyer Abbe Lowell, isn't that a fine coinkydink?] pointed out that the motion was filed according to the judge's order from last December, Walls replied, "Fine. Bill me."

Yr Wonkette is supported by reader contributions. Please click the "Donate" linky and we'll see if we can't fix those parking tickets.