Wonkette Writes Wingnut Letters To President Obama, About How He Is A Idiot 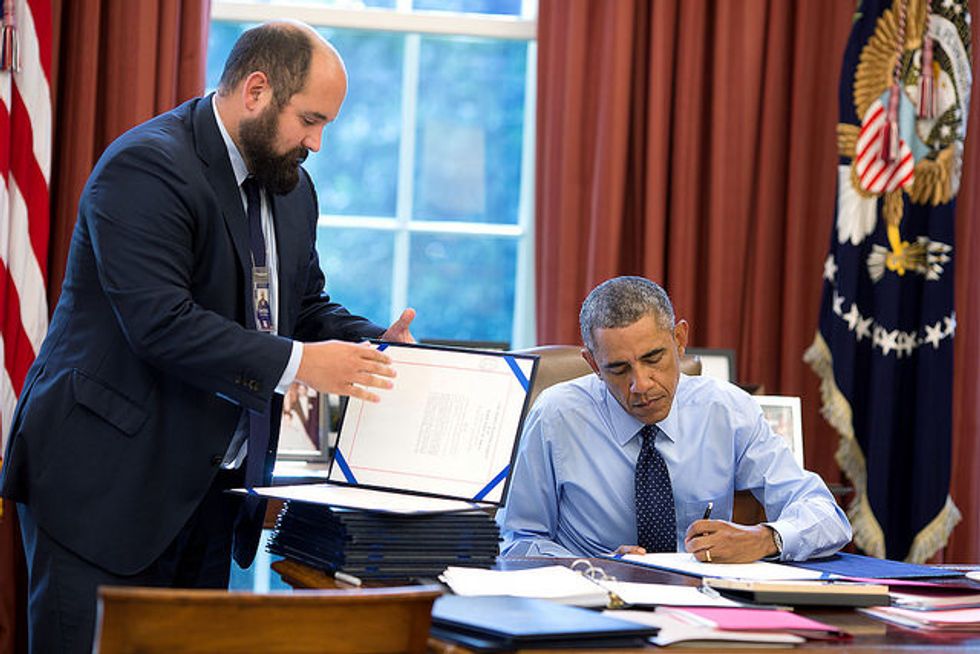 President Obama did a big interview with the "Extra" teevee program, and told correspondent Jerry Penacoli that he responds to ALL the letters his people bring him, even when it's just wingnuts writing in to say, "You Are A Idiot." The president said he tries to "address their concerns," but considering the "concerns" people have about this president, we wonder what does he say to them? When they call him A Idiot, does he call them A Idiot back?

Let's imagine what it might be like if a few of our favorite wingnuts writed the president a letter, on construction paper, in crayon and wet boogers:

Mister Obama??? Ummmmm. You are a Muslim and a Communist and I don't like it, and I wrote a song about it on my ukulele. I'm very scared.

You're so right. In fact, you should be terrified. I'm on your front porch right now, playin' yr ukulele.

Dear Barack if that's your real name, doncha know, just up in Alaska and knowing about how and why ISIS, right there at the border, don't you think you should MAYBE be paying attention to the troops, well THEY'RE the ones out there, patriotically servin' and fightin' and well, who's to say, and the Christians in the Middle East, they're bein' beheaded and there you go again, actin' like Christians are the real enemy, what's up with THAT? Willow, go stir the moose chili!

There nothing say I could to you make believe I am your enemy not. Did that make sense?

Barack, I've taken the liberty of taking over America's foreign policy toward Iran, your services are no longer needed.

You may address me as "Barack" when you are a growned-up, but until then, you little bitch, it's Mister Fucking President. FYI, you will never have my job.

WORD TO YOUR MOTHA, GHETTO BOYEEEEEEE. You might think you won this round, because you were so scared of my anti-Obama movie you put me in prison, but now I'm out and I'm a THUG and a HARDENED CRIMINAL and you better watch your BACK!

I'm having a brain fart, who are you again? I know who I am, and that's the President Of You, but I'm drawing a blank. Please clarify.

I've been out there talking about Donald Trump's YOOOOOGE secret plan to defeat ISIS and, huh, I'm PRETTY DAMN SURPRISED you haven't called Donald Trump to say "Donald Trump, I am so stupid and I can't even say ISIS right, I AM FIRED!" That's okay though, Donald Trump will be president in two years and save America because Donald Trump is the best job creator, businessman, space captain, cowboy and TV game show host of all time! TRUMP!

Okay, Wonkers, we've gotten you started. Make up all your own DEAR DUMB PREZNIT letters in the comments, which are not allowed.