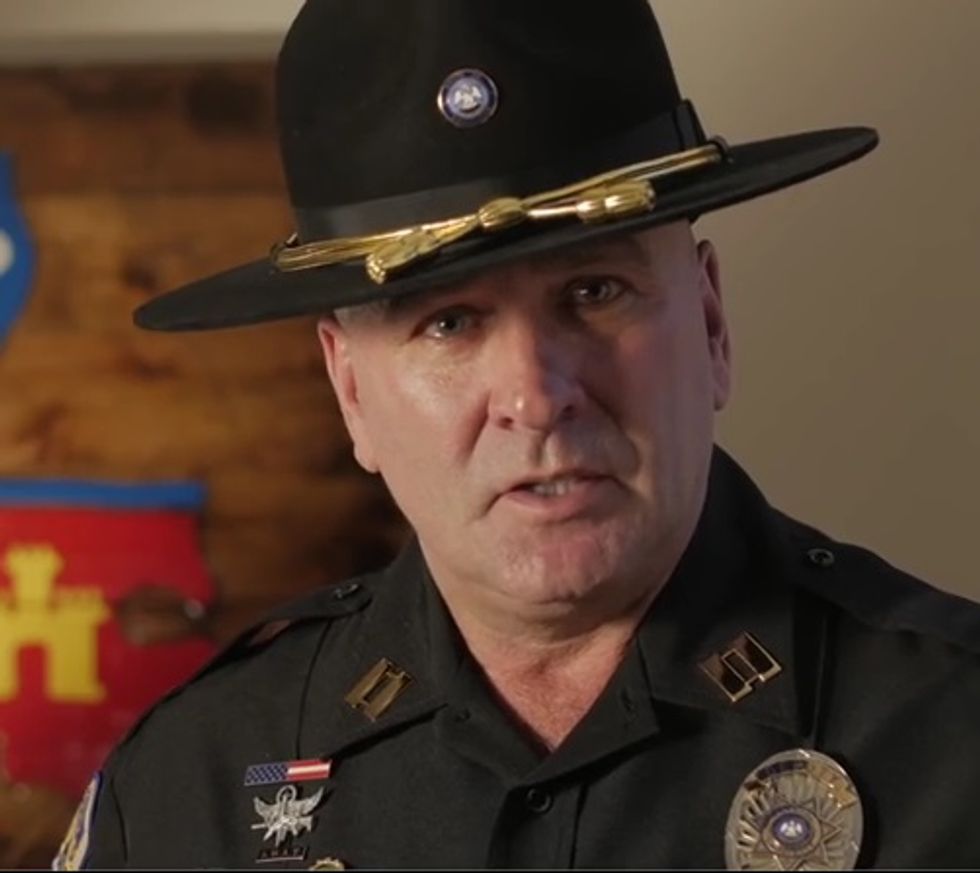 Populist, or working example of the Peter Principle?

Wonkette's favorite tough-talking local-TV "Crimestoppers" cop (and, yes, that's out of a pool of one), Capt. Clay Higgins, formerly of the St. Landry Parish Sheriff's Office in Opelousas, Louisiana, announced Wednesday that he's running for Congress. Higgins is one of several candidates running in the primary to replace U.S. Rep. Charles Boustany, who's leaving Congress to run for David Vitter's open senate seat.

We profiled Capt. Higgins back in November after falling in love with his unique rhetorical style, which mixed tough-guy "we will track you down" threats to criminals with a come-to-Jesus style of sermonizing which told lawbreakers that they know they done wrong, and should turn themselves in as the first step toward getting right with God. His videos were pure cornball sincerity; as we said at the time, "It's like Ed Wood, Jr. made a PSA after binge-watching Fargo."

Higgins resigned from the Sheriff's office in February after one of his Crimestoppers videos got a bit too gung-ho with the "we're coming for you" imagery. Higgins was criticized by the ACLU and others for promising members of a local gang, "You will be hunted. You will be trapped. And if you raise your weapon to a man like me, we'll return fire with superior fire." Yeah, that's over the top. The Sheriff's department also was none too pleased about Higgins marketing his own line of licensed merch, featuring his image and the county uniform and insignia, without their permission.

So now Higgins wants to go to Congress and fix our great nation, and darned if we don't have seriously mixed feelings about it. We're more than a little worried Capt. Higgins may be out of his depth. He made a terrifically entertaining spokesman for law and order tinged with Tough Love, but we're not sure he's the guy we want making laws. On the other hand, compared to a lot of the flakes the Republicans have been sending to Congress, he may not be so bad. Here's the video he released early in May when he was testing the waters:

Yes, there's a lot of "enemies foreign and domestic" and flag-waving and "America is threatened" rhetoric in there. That's almost balanced out by a refreshing "we're all in this together" spirit, and we're heartened by his genuinely Christian appeal to the idea that "American is a nation built by imperfect men driven by perfect intent" -- yeah, "people" would be better than "men," but the sentiment is coming from a good place. He's a Republican candidate who recognizes that we have a flawed history, and that some of the "horrors" we've overcome as a nation were "horrors of our own creation." It's not every GOP candidate who'd have the guts to follow an image of the burning World Trade Centers with a photo of a slave's scarred back. Yes, there's the obligatory scare photo of ISIS and the debt-panic lines about "elitists" who have "mortgaged our children's future" with enormous national debt, not to mention the mandatory video of the sainted Ronald Reagan. Higgins can't resist the law-n-order red meat: "Our borders are no longer sovereign. Our cities are on fire! Our police are murdered in the street. Our history is being rewritten." And our poor veterans don't even recognize the country they've returned to, yadda yadda.

Sen. Tom Cotton Dreams Of An America With Even More People In Prison

But we'd also bet there aren't a lot of Republican candidates trying to reach Congress by saying "our prisons overflow with poor men who've long ago paid their debt to society," a perspective from a lawman that's a refreshing departure from most "tough on crime" duckspeak. So there's that. He appeals to voters to come together across political and ideological differences, which even sounds a heck of a lot like that Obama guy at the 2004 Democratic convention.

So we're a bit torn. Compared to a lot of already sitting R congressmen, Higgins seems a bit less likely to call for nuking Iran and definitely against locking up prisoners forever. We haven't seen any specific policy proposals from him, either. If nothing else, Clay Higgins should make the race more interesting; thanks to the quirks of Louisiana election law, there's no primary. All candidates are on the general election ballot, and if no one gets over 50% in the general, there's a run-off between the top two candidates. Higgins faces six other Republicans in District 3; no Democrats have yet declared for the seat.

Looks like we'll have to set up a Google alert to see how Higgins does; as we said back in November, even though he's acquired the nickname "the Cajun John Wayne," we think he might be more of a southern-fried version of Terry Pratchett's fictional uber-cop, Sam Vimes. We aren't sure we'd vote for him, but as Southern Republican candidates go, we're sure you could do worse.

UPDATE March 2019: Boy, were we ever wrong. Guy's a total dipshit. See what we get for giving the benefit of the doubt? Clay Higgins, you are no Sam Vimes.