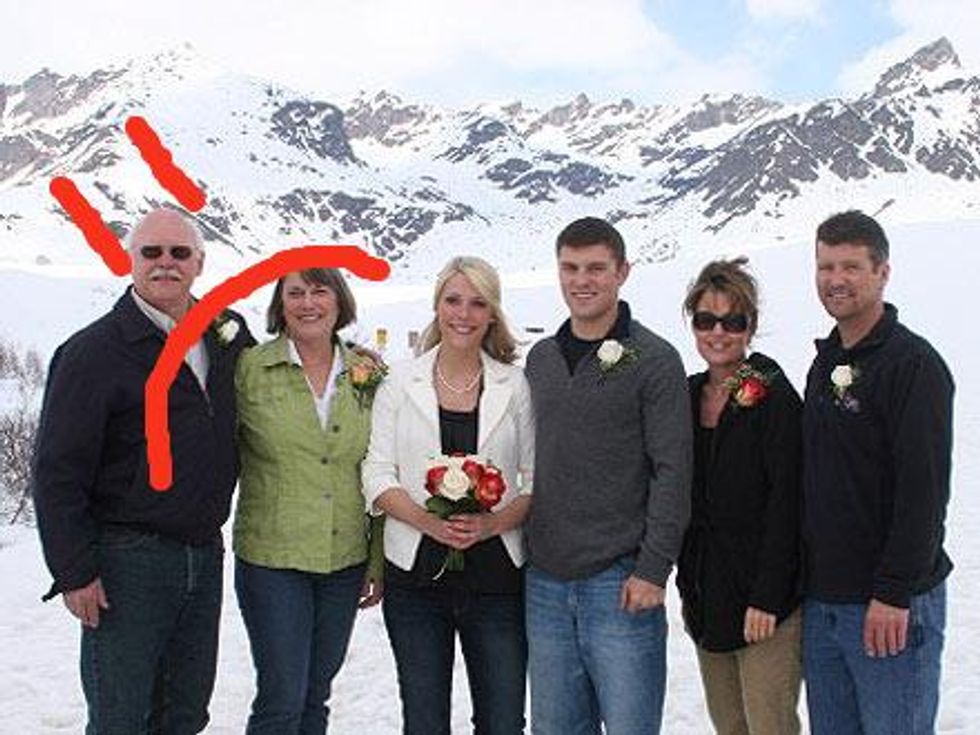 In Alaska, tragedy has struck: Sarah Palin's son Track (who is a person, not a Hot Wheels play set),married a young woman, officially making her a Palin and a part of the Arctic's largest grifting operation. Around the world, people now grieve for her, as this is pretty much the worst thing that can happen to a person. Will she be forced to talk about how much she loves guns and, paradoxically, "life" on a reality teevee show? Will she be forced to get a new chin? Probably. Osama bin Laden's widows had this to say in a joint statement: "As much as we wish death upon the United States, we stand together with and pray for the grieving people of America, who have lost an innocent woman to the Palin family at a tragic young age. May God be with you in your hour of need before He smites you."

"Our families couldn't be happier!" the Hansons and Palins tell PEOPLE in a joint statement. "These are two hard working, humble, active, studious young adults who grew up together. We're tickled that after two decades of friendship we proudly witnessed their marriage, knowing their new life together will be blessed."

YOU MONSTERS. LET HER GO! Nobody should be subjected to such inhuman torture!

The couple will have a larger wedding celebration this winter at Alaska's Alyeska Ski Resort "when extended family and friends from the Lower 48 can travel north for a long ski weekend," says the statement from Sarah and Todd Palin and the Rev. Duane and Elizabeth Hanson.

Oh, winter, when Alaska is at its most frigid and the Sun appears in the sky for approximately three minutes a day! Yes, that sounds like a romantic and fun vacation destination. They can just put on skis to pretend they are not in an utterly depressing wasteland filled with idiots. [People]