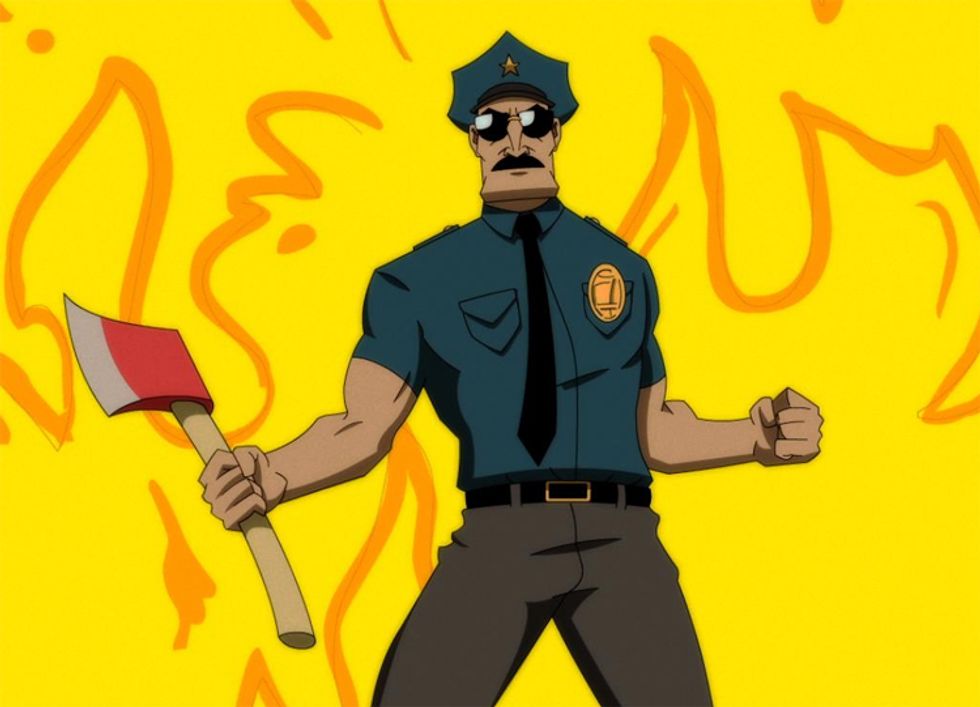 Axe Cop is not racist. But he is scary, and will chop off your head.

A Kansas cop threatened the life of a black woman's daughter on Facebook Thursday as news broke of the murders in Dallas. This made perfect sense to him, because he was a cop, he hated Black Lives Matter, the woman was black and lived in Dallas, and all the blacks kill cops. In a rare moment of sanity for a police department, the cop's bosses immediately fired him once they verified he had sent the threatening message, so there's that.

The Overland Park officer, whose name was withheld by the Kansas City Star because he has not been charged with a crime, posted the following charming message to a collage of photos of LaNaydra Williams's daughter, originally posted in 2014:

That message, in case you can't make it out in the photo, was:

We’ll see how much her life matters soon. Better be careful leaving your info open where she can be found :) Hold her close tonight it’ll be the last time.

We especially appreciate the little smiley after the warning about how creepy horrible people might find your child on Facebook. Very friendly, Officer!

Ms. Williams told Kansas City TV station WDAF she had no idea why the cop would have targeted her:

“I received a notification from a name I didn't know,” Williams recalled.

She said she didn’t get any sleep overnight, but it's not just because of the deadly law enforcement ambush that happened in Dallas.

“It's not okay. Not my child, she's all I have. [Child's name redacted by Wonkette] is my heart, that's not right. We're already on edge, so why would you do that?” Williams asked.

Williams told the TV station someone from the Overland Park PD initially told her the officer's Facebook account had been hacked, which apparently is the only way racist posts ever make it to the internet. She later received a call from Overland Park Police Chief Francis Donchez Jr., who apologized to her. The TV station reports that before she deleted her account altogether, "Williams's profile picture was a person dressed in black holding a knife to a police officer's throat," which strikes us as not a terrific idea either, though clearly not anything that would merit a death threat to a little girl. Expect that detail to be ballyhooed by the Usual Suspects to prove the poor cop was simply pushed too far by a violent image, so he had to tell a woman he'd murder her daughter. It's stressful being a cop, after all.

The Overland Park Police Department posted this message to its Facebook page Friday:

Yr Wonkette would like to suggest the fired officer not seek any further law enforcement jobs; we hope he finds work more in keeping with his skill set, such as shoveling manure, cleaning toilets, or blogging for Breitbart.