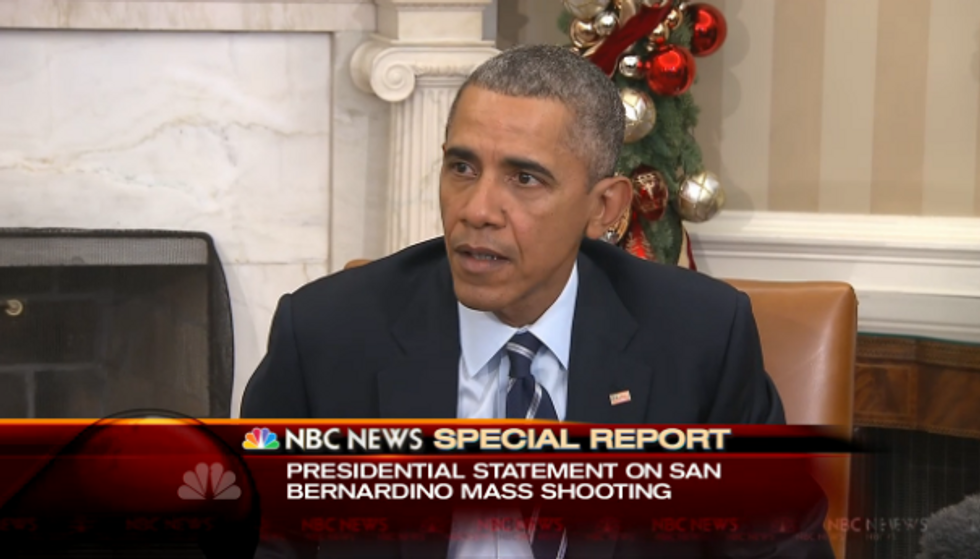 Despite repeated calls by Fox News on Wednesday night for the president to finally put on his daddy jeans and automatically label acts of violence committed by anyone whose name sure sounds Muslimy "radical Islamic Muslimical extremist jihad holy war terroristing," Obama defied that demand once again, during a brief statement Thursday morning about the massacre in San Bernardino, California:

At this stage, we do not yet know why this terrible event occurred. We do know that the two individuals who were killed were equipped with weapons and appeared to have access to additional weaponry at their homes. But we don't know why they did it. We don't know at this point the extent of their plans. WE do not know their motivations. And I just received a briefing from FBI Director [James] Comey as well as Attorney General [Loretta] Lynch, indicating the course of their investigation.

Given that everyone at Fox News -- including Bill O'Reilly, Megyn Kelly, Sean Hannity, and several of their expert guests, including Mark Fuhrman, fercrissake -- were already outraging at President Obama on Wednesday night, for refusing to say the magic terror words, we imagine that his refusal to declare this latest incident an act of terrorism and his call for waiting until we have the facts before we start bombing some folks (or doing absolutely nothing whatsoever, if it turns out this was mere workplace violence by people who were able to legally acquire guns) to be received by Fox and the rest of the conservative universe as well as any other statement by the president.

Obama also politicized the issue of the shooting by two armed suspects, by injecting guns into the discussion, as he is wont to do, typical liberal leftist gun-grabber that he is:

More broadly, as I said yesterday, we see the prevalence of these kinds of mass shootings in this country, and I think so many Americans sometimes feel as if there's nothing we can do about it. We are fortunate to have an extraordinary combination of law enforcement and intelligence and military that work every single day to keep us safe. But we can't just leave it to our professionals to deal with the problem of these kinds of horrible killings. We all have a part to play.

The president added his standard suggestion that legislators might want to get around to addressing America's new favorite pastime of mass shootings, but given that he said the same thing yesterday, and last week, and last month, and the month before that, it's transparently clear that his heart is barely in the empty suggestion by now, since we all know that the legislators who receive donations from the NRA refuse to cross their benefactors by offering anything more than "thoughts and prayers" in response to mass shootings. (Go read Think Progress Contributing Editor Igor Volsky's series of tweets detailing how much money individual politicians have received from the NRA.)

"We're going to have to search ourselves as a society," the president concluded, "to make sure we take basic steps that would make it harder -- not impossible, but harder -- for individuals to get access to weapons."

Given that the shooting in San Bernardino wasn't even the first of the day, and was the 352nd American mass shooting in 2015, and the deadliest since the Sandy Hook shooting in 2012, when 26 people, most of them children, were killed and America's response was to do not a goddamned thing, it seems we have searched ourselves and come up with a big fat shrug. Seems increasingly unlikely we'll ever get beyond that.