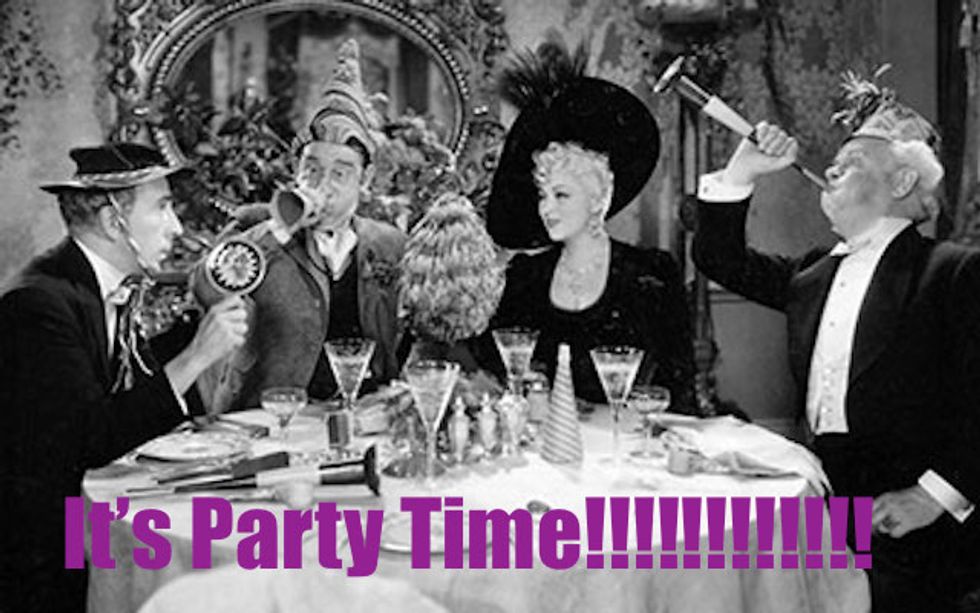 YAY! Today is a super good day! The best day in a while, in fact! For the Supreme Court of the United States of America has struck down Texas's terrible, horrible, no-good very bad abortion laws!

The case in question, Whole Women's Health vs. Hellerstedt, challenged two Texas laws created for literally no other reason than to make it harder to get an abortion. Sure, supporters insisted they were meant to protect "women's health" -- as is usually the case with these sham laws -- but in reality they did no such thing. What they did do was force the closure of all but 10 clinics in the state.

These TRAP (Targeted Regulation of Abortion Providers) laws were meant to require abortion clinics to adhere to the standards of ambulatory surgical centers, despite the fact that there is absolutely no need for that, and to require providers to have "admitting privileges" at a nearby hospital. The latter is especially absurd because an emergency room has to "admit" you no matter what. All admitting privileges do is give the doctor the option of being your attending physician, which isn't actually necessary. However, it was a rather clever tactic given that many Texas hospitals will not give abortion providers admitting privileges for fear of upsetting anti-choicers.

Had it been decided the other way, the court would have essentially been saying that states can make up disingenuous sham laws to achieve aims they would not be able to legally achieve otherwise (such as outlawing abortion). Which would have been bad for everyone, frankly. Not just abortion-havers.

“We conclude,” Justice Breyer wrote in the majority opinion, “that neither of these provisions offers medical benefits sufficient to justify the burdens upon access that each imposes. Each places a substantial obstacle in the path of women seeking a pre-viability abortion, each constitutes an undue burden on abortion access, and each violates the Federal Constitution.”

And our girl Notorious RBG wrote a brief concurring opinion, deftly explaining that the laws would actually make things more unsafe for abortion-havers, as they would likely be driven to seek illegal procedures: "When a State severely limits access to safe and legal procedures, women in desperate circumstances may resort to unlicensed rogue practitioners, faute de mieux, at great risk to their health and safety."

Clarence Thomas's dissent involved a lot of whining about how "rights" guaranteed by SCOTUS (whose job it is to interpret the Constitution) were not the same as real constitutional rights. Which I guess means that he thinks the right to abortion is a fake right, and the right to get around allowing people to have that right by creating sham laws that achieve no other aim than to deny them that right, is a real right.

Alito was mad that the two laws were struck down in conjunction, because HEY, maybe there was some good stuff in there:

"If some applications are unconstitutional, the severability clause plainly requires that those applications be severed and that the rest be left intact.... How can the Court possibly escape this painfully obvious conclusion. Its main argument is that it need not honor the severability provision because doing so would be too burdensome."

WAAAHHHHHH WAAAAHHHH WAHHHHH! Sorry Alito, but everything in there was ridiculously unconstitutional. It's interesting, however, that neither Thomas nor Alito managed to point out the parts of the laws they felt were super great and definitely constitutional. Perhaps because there are none! Maybe they were just hoping they'd appear if individually dissected? Either that or these two dudes just do not like abortion. (Hint, it is that last one.)

Presumptive Democratic presidential nominee Hillary Clinton celebrated the ruling on her Facebook page, while also noting that the right to choose is still in danger:

The Supreme Court’s decision striking down Texas’s dangerous, politically-motivated, anti-abortion laws this morning is a victory for women not just in Texas, but across America. By overturning restrictions that made it nearly impossible for Texans to exercise their full reproductive rights, the Court has rightfully upheld every woman’s fundamental right to safe, legal abortion, no matter where she lives. [...]

But our fight is far from over. In Texas, throughout the South, and across the country, a woman’s constitutional right to make her own health decisions is under attack. In the first three months of 2016, states introduced more than 400 measures restricting access to abortion. We’ve seen a concerted, persistent attack on women’s health and rights at the federal level. Meanwhile, Donald Trump has said women should be punished for having abortions—as if women, particularly low-income women and women of color, didn’t already face enough barriers to exercising their basic rights. He also pledged to defund Planned Parenthood and appoint Supreme Court justices who would overturn Roe v. Wade.

Today’s decision is a reminder of how much is at stake in this election. We need a president who will not only defend women’s health and rights—including appointing Supreme Court justices who recognize Roe v. Wade as settled law—but expand them, by overturning the Hyde Amendment, protecting funding for Planned Parenthood, and building on the Affordable Care Act and its benefits for women’s health. Above all, today and every day, we need to continue to protect access to safe and legal abortion—not just on paper, but in reality.

Donald Trump has yet to respond, but we will be sure to update you when he does. That'll be a real treat.

Anyway, today is a day for celebrating! So go out and have a drink and toast to the fact that we actually got to see some justice in action for once. YAY THINGS NOT BEING TERRIBLE!