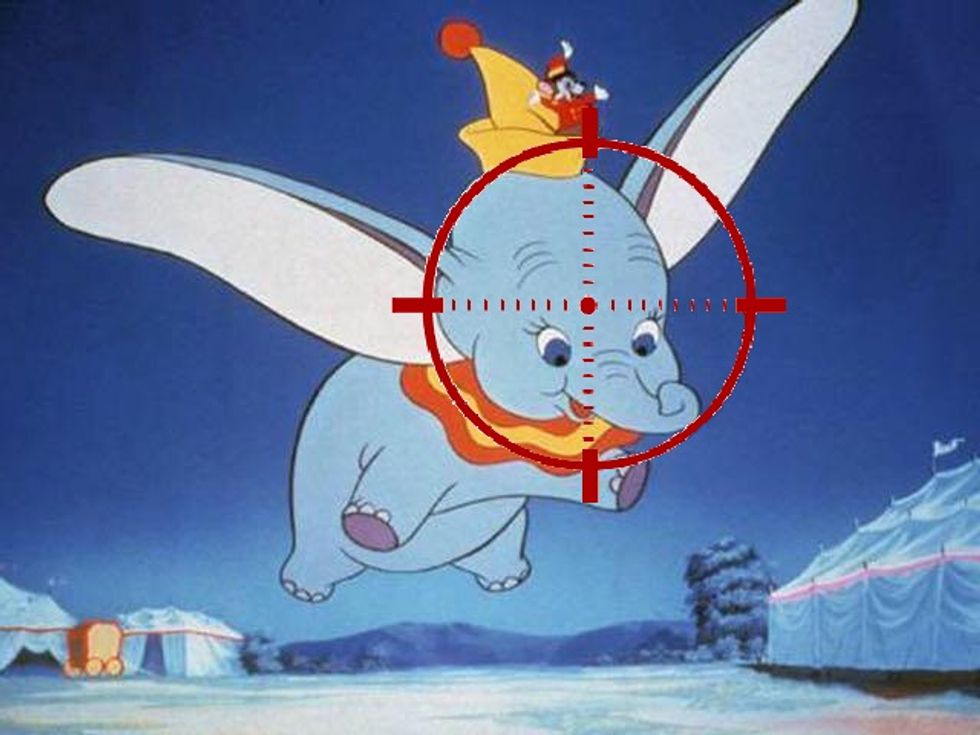 Back in November, there was all kinds of hell raised on the interwebs when the Trump administration quietly undid an Obama-era rule that banned the importation of dead animal parts from several endangered species, like African elephants and lions. The internet reacted with understandable horror, and the US Fish and Wildlife Service (FWS) backed off on rescinding the rule, especially after Donald Trump himself said he supported the old rule, even though it came from Obama. (Is that even legal?) In November, Trump tweeted that he certainly didn't think anyone could convince him killing those beautiful animals is a good idea:

Not even his stupid idiot disgusting sons!

But oh, golly, looks like he and Interior Secretary Ryan Zinke have decided they're just fine with the horror show after all. As with its original decision in the fall, FWS didn't call any attention to its new policy, which will allow importation of African elephant body parts on a "case by case" basis. Or rather, a trophy case by trophy case basis.

The U.S. Fish and Wildlife Service quietly announced the policy shift in a March 1 memorandum that withdrew previous trophy hunting rulings, including an Obama-era ban on imports of elephants hunted for sport in Zimbabwe and Zambia.

The memo offered that the move came in response to a late December ruling in a lawsuit in which Safari Club International and the National Rifle Association's lobbying arm challenged the ban.

Neither the Interior Department nor Fish and Wildlife initially issued news releases announcing the change, according to news reports.

As we explained last time around, the Endangered Species Act prohibits bringing trophies from endangered animals into the USA, but there’s a loophole allowing such imports when there’s evidence that hunting somehow benefits the species. Supporters of canned hunts in Africa say there's a lot of money to be made by African nations (not to mention hunting outfits) by auctioning off limited numbers of licenses to shoot a few endangered animals, then using the process to preserve the species and hire rangers and game wardens to crack down on poaching.

That's the theory, at least, although those dumb greenies at the Natural Resources Defense Council don't seem impressed by the logic of shooting elephants to save them, particularly since there is little evidence that the revenue from big-ticket hunting auctions actually makes its way into wildlife preserves. The NRDC said in a blog post yesterday that Trump had "broken his promise to maintain the ban on elephant trophy imports from Zimbabwe and Zambia," and noted that the NRDC and other conservation groups had sued to preserve the ban. Guess their lawsuit wasn't nearly as good as the NRA and Safari Club's, plus it didn't even promise any blood sport. NRDC argues that the "case by case" evaluation criterion is actually a strategy to allow all the trophies people might want without ever having to go through the formal federal rule-making process, and to approve hunters to bring back endangered animal trophies "in a way that is less subject to judicial scrutiny and public review." The NRDC blog post closes,

Endangered species belong to all of us -- not just the rare few who possess the desire and the vast sums to kill, stuff, and mount them. The American public deserves to know about and express its opinions on decisions about endangered species policies. And we also deserve a president who will keep his word about his administration’s actions with regards to these species.

Now that's just silly. Those critters belong to the governments that control them, and if some African government officials want to get rich selling off their countries' endangered species, that's just an example of entrepreneurial government on the Trump model. But some people just don't seem to see how important killing elephants is to the people who want to kill elephants. Chelsea Clinton isn't a fan, and neither is singer-songwriter person Ricky Davila:

Voice Actor Tara Strong, who performed the voice of Bubbles in "The Powerpuff Girls," suggested a course of action that, in non-cartoon form, would be against our commenting rules. Get ready for the NRA to complain this is some kind of threat in animated form:

This is what we do to a-holes who want to kill elephants ???? pic.twitter.com/T5oghvKrji