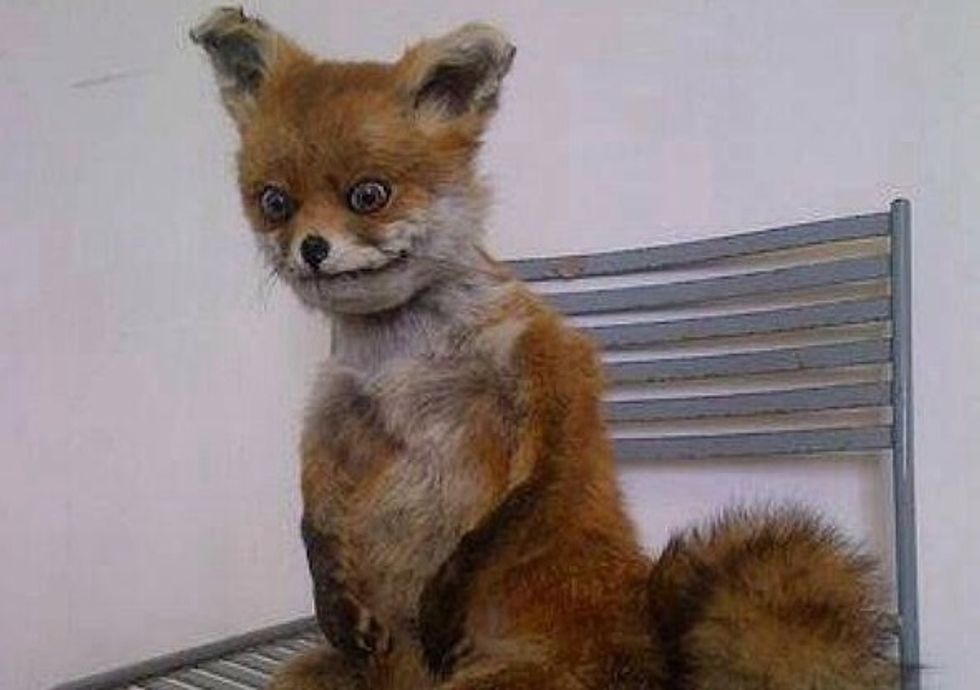 Is this some kind of GAME? Do I AMUSE you?

Not long ago, we learned that even though Donald Trump has called big game hunting a "horror show," Ryan Zinke's Interior Department would nonetheless allow Trump's stupid disgusting animal-killing sons -- and anyone else with lots of money -- to import trophies of endangered animals they've killed, just as long as they pinkie swear the hunt in some way was useful to preserving the species. Last week, we got an important insight into how such wise decisions on killing threatened critters came about: Just as climate destruction policy is being set by Big Oil and Big Coal, the rules on importing trophies are being rewritten by Big Game hunters:

A review by The Associated Press of the backgrounds and social media posts of the 16 board members appointed by Interior Secretary Ryan Zinke indicates they will agree with his position that the best way to protect critically threatened or endangered species is by encouraging wealthy Americans to shoot some of them.

The new committee, the International Wildlife "Conservation" Council, held its first meeting Friday. Possibly at a shooting range. Where everyone was encouraged to wear a pith helmet. Zinke, not surprisingly, is a big fan of the manly art of hunting, and since Barack Obama's administration put rules in place to limit importation of corpses of endangered animals, that alone is an excellent reason to roll them back.

African big-game hunting is a sport for the very rich; safaris can run $50K for a couple of weeks, and that's great, because, you see, the idea is that the money goes to protect habitats, hire rangers and wildlife preservation experts, and create jobs for people to help Drunk Bwana bag that lion or elephant. Zinke lauded the plans for the advisory board last year, saying in a statement:

This council will provide important insight into the ways that American sportsmen and women benefit international conservation from boosting economies and creating hundreds of jobs to enhancing wildlife conservation.

Inspired by Zinke's proclamation, The North American Federation of Foxes immediately got to work on a proposal for providing henhouse security.

Wouldn't you know it, stupid granola-munching environmentalists pointed out that foreign countries could create even more jobs with photo safaris, and that big game hunters don't so much "improve" threatened species by taking weaker specimens -- a job that Nature, Red In Tooth And Claw, LLC, is already quite good at -- but that the mighty Nimrods tend to "target the biggest and strongest animals, weakening already vulnerable populations." Yeah, but that gives some of those beta lions a chance to step up to the challenge and get big and strong enough to get shot themselves, don't you cucks understand anything about evolution?

The members of the new commission run the gamut from people who fukken love hunting to people who REALLY FUKKEN LOVE HUNTING:

Almost all of them are members of Safari Club International and the NRA, which have both pushed lawsuits against the old-style Interior Department's silly rules against shooting everything that moves. A surprising member also belong to the Spearmint Rhino Gentleman's Club, where at least they aren't allowed to shoot any of the strippers. THAT WE KNOW OF.

In a paragraph strangely reminiscent of Princess Leia warning Darth Vader that he'll be in big trouble for seizing a diplomatic ship, WaPo notes:

In a letter this week, a coalition of more than 20 environmental and animal welfare groups objected that the one-sided makeup of the council could violate the Federal Advisory Committee Act, which requires government boards to be balanced in terms of points of view and not improperly influenced by special interests.

We find that quaintly optimistic, a bit like the time a baby jaguar looked pleadingly into Eric Trump's sneering face before he blew it away.

Still, Interior Department spokesperson Heather Swift, for the sake of "appearances," responded to the little titty-baby Bambi-huggers, patiently explaining the council includes folks who “represent all areas of conservation and varying opinions.” Which is true! The panel really is quite diverse, since its members like killing all sorts of critters. Plus, we already said the council includes both bow AND gun manufacturers. What do these greenie freaks want, a token boomerang or atlatl maker?

Lots of proficient killmongers on the council, including one Safari Club dude who, according to the Humane Society, "has logged nearly 500 kills — including at least 18 lions, 13 leopards, six elephants and two rhinos." And now, he will go after the most challenging game of all: federal policy.

He helped organize Sportsmen for Trump during the 2016 presidential campaign and recently posted photos on his Twitter page of himself with Trump Jr. and Zinke, standing before an array of mounted big-horn sheep and a bear.

“I see the world from a hunting lifestyle,” Mark told the AP, adding that he has no preconceived agenda for his service on the conservation council. “It’s the most pure form of hands-on conservation that there is. I will approach all decision-making with my background.”

In accordance with its mandate, the International Wildlife Conservation Council's eventual written report will be shot, stuffed, and mounted on the wall of a hunting lodge in Montana.

Yr Wonkette is supported by reader donations. Please click here to support us. And YES, THE GODDAMN COMMENTING RULES REMAIN IN EFFECT FOR THIS POST.