Yeah, We Think This One Weird 'Free Energy' Ad Is Crap, Also Too 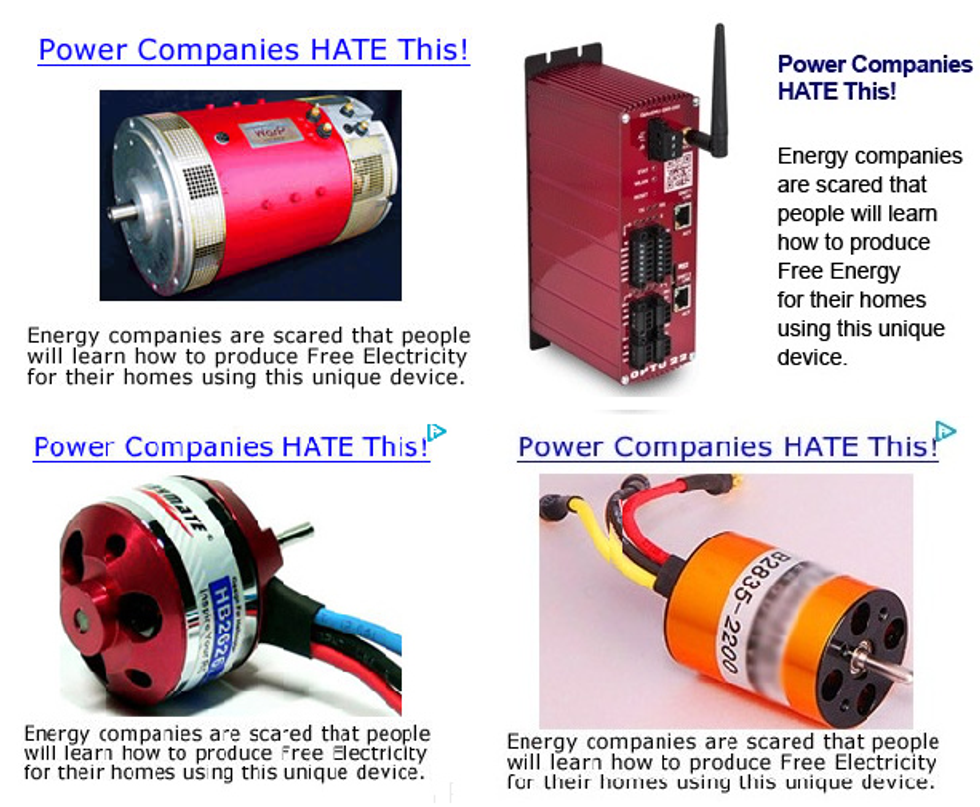 One of the many fine things about Yr Wonkette is that we are happy to take money from mindless jerks and then say they should be the first ones up against the wall when the Revolution comes. This is why we have that dopey Newsmax feed over there on the right of your screen -- we're laundering filthy Kochdollars into wholesome Wonket Ameros. (You may also recall that Your Editrix wrote a handy guide to how you can assist Yr Wonkette in its mission of Global Blog Domination.) Not only will we bite the dirty corporate hands that feed us, we'll happily pour a little lemon juice into the wound, especially if the ad strikes us as scammy.

And so, let us see just What Is The Dealio with those stupid "Power Companies Hate This" ads! One glance at the things and you should be thinking "scam," just because, for god's sake, everything about them screams "scam," from the carny-style come-on, with its hints that you'll be treated to arcane, forbidden knowledge that THEY don't want you to know, to the obviously-nuts graphics which couple the same text about "this unique device" with images of various vaguely high-tech equipment...and it's a completely different gadget from week to week:

The ads that have recently run on Wonkette are for an outfit calling itself Power4Patriots, which appears to be a variation on a similar -- probably identical, but we can't say for sure -- company called Power4Home -- similar pitch, similar products, and similar reputation as a scam, only the Power4Patriots ads include a superficial overlay of Obama-bashing and doomsday prepper nonsense. Power4Home will sell you crappy instructions for homemade solar and wind generators, then try to sell you additional scammy energy stuff, while Power4Patriots will sell you all that AND a dose of right-wing survivalist rhetoric, too.

One of the fun things about trying to research these loony scammy things is that since they start out on the fringes of the Interwebs, you aren't likely to find a hell of a lot of "respectable" sites even stooping to debunk them. The Atlantic, after all, is too busy taking scamdollars from Scientology to investigate a louche bunch of free-energy nuts. And since these guys' income also depends on their being fairly good at search engine optimization, a fair number of results for searches including the words "review," "debunked" and even "scam" will turn up sites that assure you that the sellers are the kindest, warmest most wonderful human beings they've ever met.

And then there's the counter-scammers: One of the top Google results for the phrase "power companies hate this" brings up a fairly good discussion of problems with the Power4Home products -- but it runs on a website that's pushing magnetic-powered perpetual motion machines, which reminds us of Pat Robertson warning his viewers not to fall for "scamsters in religious garb."

So here is the dumb video that runs -- endlessly! -- if you click on the "Power Companies HATE This!" ad. In its original form, it's a Flash animation that can't be paused or skipped through; because we love you, we've converted the damned thing into a conventional MPEG video. We had some laughs last time at that "family survival plan" ad that promised to tell you Vital Secrets "in the next six minutes" and then went on for twenty, but that was clearly just a warm-up for this ad, in which narrator "Frank Bates" promises that "what I'm about to tell you in the next three minutes could get me in a lot of trouble" -- and then launches into an impressive 40+ minute spiel. We'll confess we have yet to watch the whole thing, but we present it here as a public service educational warning.

So what is this thing, anyway? Despite the web ad's mention of a "unique device," the video does at least make clear that there's no off-the-shelf equipment being sold here -- and incidentally, no actual product that you could take into a courtroom and prove to be fraudulent. Instead, Power4Patriots is selling you, for the low, low price of $27 plus shipping, a CD-ROM and online access to a set of e-books and online videos that purport to provide detailed plans for a solar power system and your very own wind turbine. If you want actual books, of course, they'll sell you those, too -- and as hobbyist and gadget-blogger Lee Devlin notes, much much MORE:

After purchasing it, you’ll find that if you pay $67 more, you get a physical spiral bound book along with 3 DVDs that also cover solar and wind DIY projects which is basically the same material, just in a format that might be more convenient for you. If you turn that down, you’ll be offered the printed book for another $27. After that, you’ll be offered heirloom seeds for another $67 to help you through any upcoming societal collapse. So there’s a lot of upselling going on after the initial $27 investment. I’m also now on the email list and I suspect I’ll be hearing a lot more from the company in the future.

They sure like prices that end in seven! Devlin bought the basic package to write his review, and quickly realized that the Power4Patriots plans, assuming that they work at all, will get you a solar power system that ends up costing roughly three times as much as commercially produced solar panels just for materials, to say nothing of the considerable labor involved. After all, he notes, the reason Solyndra went belly-up was that it was unable to compete with the inexpensive solar panels coming out of China. And as the wingnuts all told us, Solyndra was somehow The Worstest Scandal Evar (until BENGHAZI!!!) because Barack Obama wants to throw taxpayer money at solar energy, an unproven, risky, UN Agenda-21 technology...which Power4Patriots says you should now buy into so you can Beat Obama's Electricity Monopoly For Good.

What's especially silly about the ad's rhetoric is its superficial borrowing of a few wingnut ideas -- the government is running roughshod over the Constitution and bleeding taxpayers dry, and if you buy a Power4Patriots "system," you'll be self-reliant -- combined with resentments that seem utterly at odds with purported conservative values: the government abandoned people after Katrina, and does nothing to keep electricity costs down or maintain the power grid. "Frank Bates" also rails against "government power monopolies" that don't actually exist, outside of a few publicly owned power systems. That's OK, of course, because the politics is just window-dressing for the patter. Guy's got some crappy plans to sell.

Is Power4Patriots a scam, in the sense that a perpetual-motion machine is a scam? That depends on what your definition of "scam" is. After all, you might actually be able to build solar panels and a wind turbine from these plans, albeit at a far higher price, much more work, and less reliability than you'd get with commercially available systems (and wind turbines for single-family homes are probably less practical than simply improving a home's energy efficiency). In theory, you could also build your very own home appliances and car, too, but that's a hobby, not an escape from Big Gummint.

And yet there's something undeniably attractive about the cant and paranoia in these dumb ads; maybe it's akin to the pleasure of reading the Weekly World News and imagining some hypothetical knucklehead who believes that nonsense.

Obviously, there is more for us to investigate about the world of bottom-feeding interwebs ads, and more of our own sleazy advertisers to kick at. Once is a novelty, twice is imitation, and three times is probably, god help us, a series. Next time we get around to one of these, we'll maybe introduce you to some hot Asian women whose greatest desire is to meet a rightwing American gun nut.

"Sundays With the Christianists" is taking another weekend off, the lazy bastard, but will be back soon.

In the meantime, join Yr Doktor Zoom for the Wonkette Book Club! This month's selection is Al Capp: A Life to the Contrary, by Michael Schumacher and Denis Kitchen. It's a thoughtful biography of a pretty sleazy guy whose comic strip, "Li'l Abner," was generally more humane than he was. Also, this book may or may not contain Energy Secrets that will free you from the grid and help your family survive the coming collapse of society.