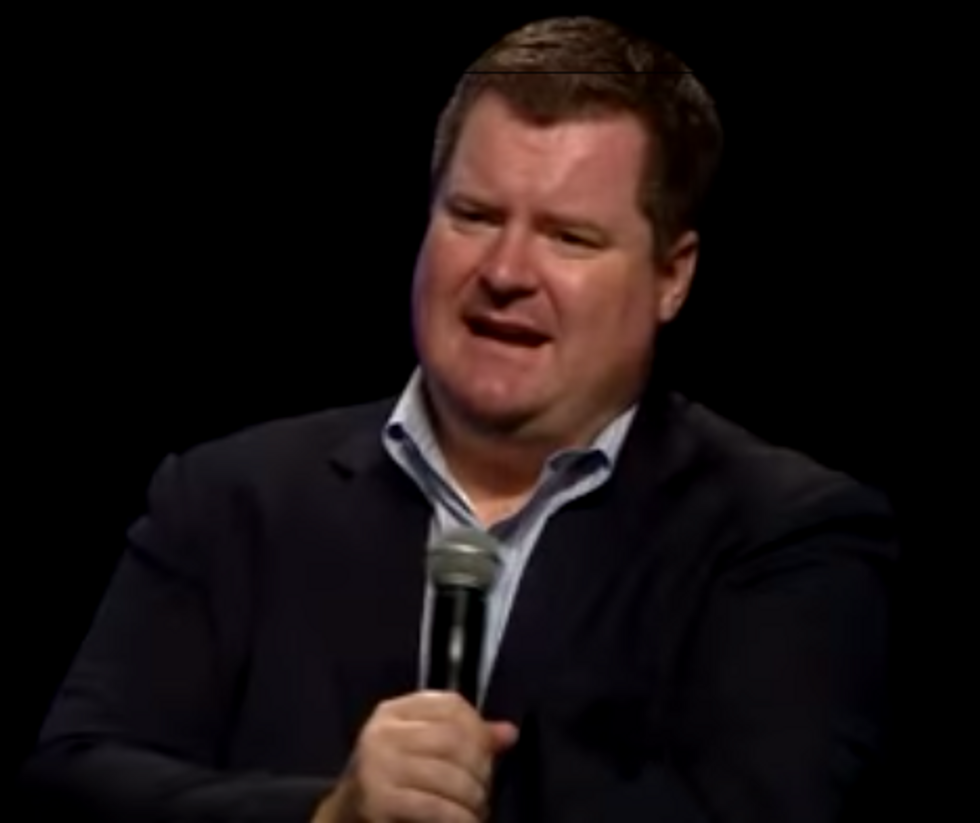 Who knew RedState editor and Fox News contributor Erick Erickson, son of himself, was such a giant pussy? Oh, sorry, we mean such a "insert euphemism of choice related to the female reproductive system"? Turns out, though, he is, and now he wants the entire genre of impotent gap-toothed subliterate conservative slash fic to "recalibrate":

But folks, this is anger at an unhealthy level. It is anger that has gone beyond the righteous anger of repeated betrayals from Washington. It is an anger that has become unhinged and is potentially uncontrollable. Anger at that level is more often destructive than constructive.

Erickson, let us never forget, once wrote that while he realized "we are not supposed to use 'angry' rhetoric these days," it was fully warranted for him to wish Treasury Secretary Tim Geithner were "getting punched in the face, though metaphorically speaking," because he read a column that made him REAL MAD. This is the same Erickson whose site once declared it had "drawn a line" on Roe v. Wade and demanded that all front page contributors to RedState must pledge to uphold the same extremism:

The reason for this is simple: once before, our nation was forced to repudiate the Supreme Court with mass bloodshed. We remain steadfast in our belief that this will not be necessary again, but only if those committed to justice do not waiver or compromise, and send a clear and unmistakable signal to their elected officials of what must be necessary to earn our support.

We looked for the asterisk indicating that "mass bloodshed" was metaphorical, but gosh, there wasn't one. So what is this "unhealthy level" of anger that now requires a recalibration, according to Erickson? Why, it's mean emails and voicemails about Erick Erickson. Super mean. Super angry. Over the line. Indecent. Here is a sampling, from his sampling, of some of this unacceptable anger:

Hey Erick…. Go Fuck Yourself ya dipshit, not seeing it and then embracing it!…… MORON…. Bath in the TRUTH!….

what a shill… u are just ordinary…..fukin Moron….I don’t even like Trump.. But u r the worst kind of hypocrite…I have never e-mailed a site like this..but u are what is wrong with the thinking, or lack thereof,, in the media….I will curse your site and ur name every chance I have…..Sell out mother fucker

I am a registered Republican and want to know why Trump is not invited to speak? This really pisses me off…. I am moving towards the independent party because of shit like this. Is Mr. Erickson really this fucking stupid? What an idiot….

We are particularly amused that Erickson included that one, given this not-so-long ago story that happened to appear at his very own site:

That almost sounds like a Wonkette headline, so perhaps Erickson was taking an unsuccessful stab at satire? It couldn't be the "fat" part that irked him. Maybe it was the salty "chickenshit cocksucker" language that so offended his delicate sensibilities, though that's hard to believe coming from the guy who once called a Supreme Court justice a "goat-fucking child molester."

Or maybe it was just the terrible spelling and punctuation, which is so bad (and yet, we are sure, a fair representation of your average RedState reader), that it even hurts our feelings.

There are other, nastier, comments he shared:

Trump is the man! Fuck Eric Ericson. hope he and all women in his life are raped, beaten and murdered by illegal spics! Go Trump!

But heck if we can tell the difference between that and Erickson's gleeful and giggling report that police officers had Tased an Occupy Wall Street protester, who ended up in the hospital, because "watching a hippie protester get Tased just makes my day."

Or this, by RedState front page contributor Aaron Gardner, who asked, in a healthily angry way, apparently, whether Rep. Renee Ellmers -- a "pro-life" Republican from North Carolina who dared to suggest to her party that a 20-week ban on abortion, which she supported, was politically unwise to require rape victims to report their rapes to the police to qualify for the "rape exemption" -- is "worthy of life." Gardner said she "should come out and justify her existence." Sure, it's no wish for her to be murdered, exactly, just an innocent question about whether she deserves to live. Like the innocent threat Erickson once uttered that he'd "pull out [his] wife's shotgun" on any government "twerp" census worker who dared set foot on his property.

How is one to know when angry rhetoric is acceptable, and when it goes too far? Just last month, Erickson proclaimed:

We have passed the point where Nazi comparisons are inappropriate.

Why? Because he'd watched some obviously edited Planned Parenthood videos (that, even with their editing, do not indicate any wrongdoing) and determined that Planned Parenthood's very existence is just like the Holocaust and slavery:

If Republicans are not willing to make this their hill to die on and even see the government shutdown to stop this, the Republican Party needs to be shut down. [...]

If Abraham Lincoln’s party will not fight to stop a practice that defends itself with the same arguments used by proponents of slavery, it is time for a new party.

But perhaps Erickson's beloved party of Lincoln need not shut down completely. Perhaps it merely requires recalibration, so that its proud members are not so quick to issue ugly and angry insults against those they do not like, such as calling Hillary Clinton a "homely woman" who slept "her way into power."

Or maybe, just maybe, Erickson is crying like a girl because he can ejaculate rancid semen on his keyboard with the best of them, but it sure stings when some of it gets in his eye.