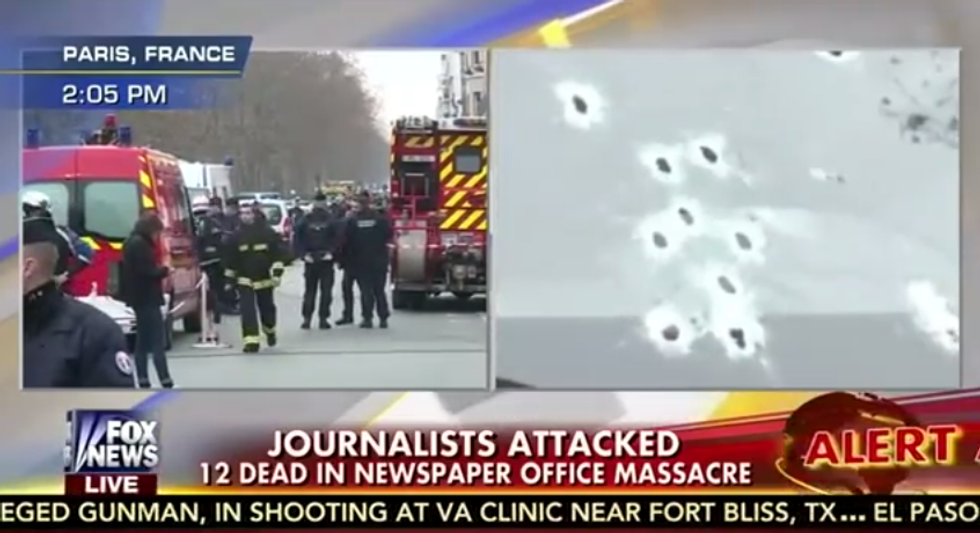 What? Politically correct Muslim terrorists, who, it turns out, are just like Nazis and fascists and communists? Does that even make sense? No, but shut up and let Fox's totally not biased "military expert," retired Air Force Lieutenant General Tom McInerney, tell you and Fox Blond Steve Doocy and Other Fox Blond Elisabeth Hasselbeck and the world what is actually what:

This is a classical radical Islamist attack, Steve, and political correctness is killing us. This is a prime example. Until we hold the Arab world and the Muslim world accountable for letting this radical Islamic ideology, which, as i have said before, is as evil as Nazism, fascism, and communism; it is not a religion -- until we hold these people accountable in their own environment, as General el-Sisi, the President el-Sisi of Egypt, said just a few days ago, when he chastised the imams for preaching this kind of radical ideology. So the west, the entire world, must hold Islam and the Muslims accountable.

Very Serious Journalist Steve Doocy also reports that according to stuff he is seeing on the Twitters, weenie Second Amendment-hating French police don't even carry guns, which is a damn shame, because we all know here in the U.S. of America that the only thing that stops a bad Muslim with a gun is a good cop with a gun.

"That, thankfully," says Doocy, "is not the case in New York." Praise Allah! New York cops are fully armed and ready to shoot whatever needs shooting, although they are not quite so ready to actually do their jobs these days, ever since Mayor Bill de Blasio -- so terrible, he's probably a Muslim too -- dared to be less than post-racial, as is dictated by Fox News law. [contextly_sidebar id="4xhu4liOQoqPHGkxKRMMar9cwsLpqjaD"]

But hey, hey, heyyyyyyyy, Steve, let's not start praising New York quite so fast, pal. While McInerney agrees that, yes, "thankfully," New York cops are not Parisian cops, thanks a whole lot to de Blasio, New York might turn into Paris faster than you can say, "What even the what?"

With the current leadership in New York -- and I'm referring to the mayor, the communist mayor you have up there -- that may change. So I think that the world better wake up. We've been doing this for over 13-plus years after 9/11, and it's time that people removed the political correctness and hold the people accountable with global public opinion. Challenge them.

We hate to differ with the military expertise of a guest on Fox, but it's hard to understand the direct correlation between Parisian cops being too PC to carry guns and communist de Blasio endangering the lives of New Yorkers with his communism, but sure, why not? We imagine that when he says we should challenge "the people," he's not referring to himself.

Fortunately, Elisabeth Hasselbeck shows off her tough interviewing skills by asking him to elaborate on that.

"What do you know specifically about the growth of radical Islam in France?" she asks. Excellent question, because McInerney knows ALL the things about that.

Well, France has got approaching 20 percent of a Muslim population. When you get there, they provoke the culture of the nation that they are in, and they want the nation to adopt. And that's where the political correctness comes. And so that's the danger, Elisabeth. They become much more assertive, and they do these kind of things.

Christ, we are so terrified now of how easy it is for These People to show up in our country and all of a sudden start doing these kinds of things like shooting up the whole place, but McInerney has some good news for us, which is that not all Muslims are in France because it turns out there were just two or so gunmen, not the entire planet of Muslims. Whew, that's a relief, we guess? Still, we shouldn't feel too relieved.

"Until that society themselves outs these people," he says, "they must out them." Ok, good plan, makes lots of sense, thanks! Wait, huh? "We, quote, 'as infidels,' cannot do that. Look, our own president says that the Islamic state in Iraq and Syria is not Islamic. Please! Political correctness is killing us."

OK, so we are not any clearer on what happened in Paris or how it is just about to happen in New York too, and how this is all tied to Nazism and Obama, but we're pretty scared for our very lives now, and also of politically correct Muslims and Barack Hussein de Blasio. And we're pretty sure that, as usual, is exactly Fox's point.