Your Guide To The Boston Manhunt Friday News Dump 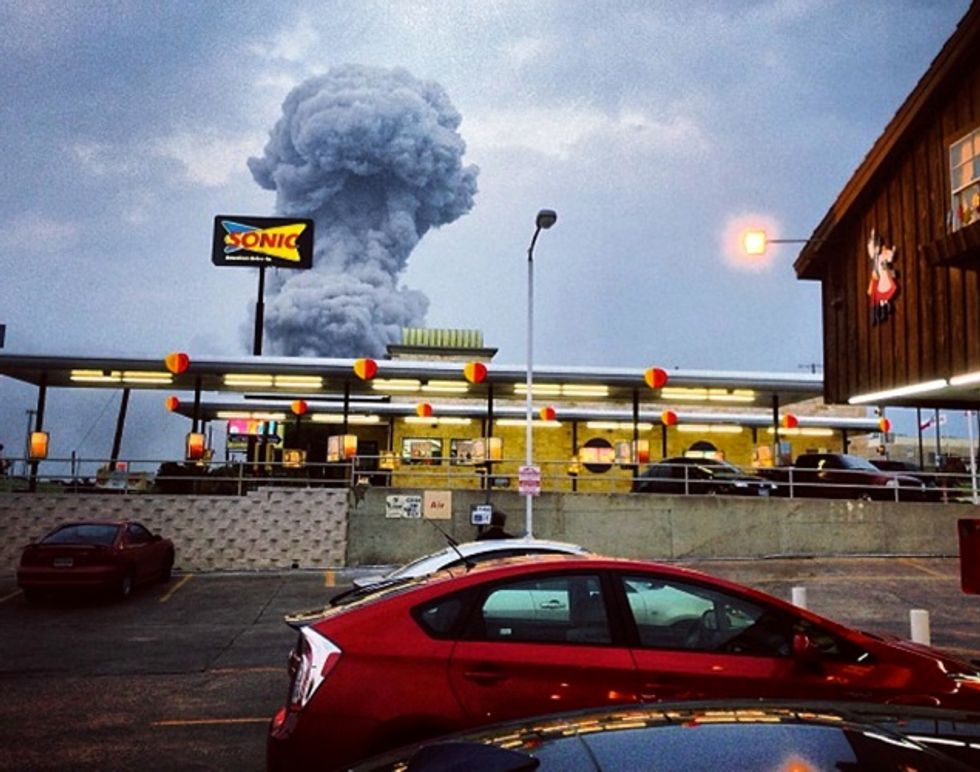 Good afternoon! We thought maybe you would be wanting a respite from everybody yelling about how any Muslim suspected of anything should be deprived of due process and tortured, so we put together a little list for you — believe it or not, other things have happened.

Indeed! They happened yesterday, while everybody was paying attention to the Boston drama, so nobody really noticed, as was obviously the whole point. So let's take a look — who took advantage of a dead guy and a manhunt to get their dirty laundry taken care of?

New York cops who assaulted the bejesus out of Occupy Wall Street get off scot-free.

The first case, of the illustrious Tony Bologna (really! We do not shit you!), happened last year, when a YouTube video surfaced of him observing two women restrained by orange mesh and immediately pepper-spraying them in the face for no apparent reason. It's still on the Internet. You can watch it. Here's what prosecutors had to say about it:

“The District Attorney’s Office has concluded, after a thorough investigation, that we cannot prove these allegations criminally beyond a reasonable doubt," says Erin M. Duggan, chief spokeswoman for DA Cy Vance.

Surely, though, this video, of Deputy Inspector Johnny Cardona punching a dude in the face in front of the press, yielded something?

"It was not clear from the evidence that their actions were not justified," says a source with knowledge of the prosecutors' decision. "These were two on-duty members of law enforcement, reacting during a chaotic scene that included much more than the short video clips that most people have seen. The minutes before and after the incidents create significant doubt as to the criminality of the officers’ actions."

"That thing that very clearly happened did not happen that way — don't you know cops can punch people in the face for stuff that happened 10 minutes before?" HAPPY SATURDAY EVERYONE.

The Boy Scouts want to let in the gays!

There aren't many organizations that can adopt more inclusive policies and still look like they're run by a bunch of assholes, but the Boy Scouts of America managed to pull it off yesterday, albeit quietly, on account of the domestic terrorism they used to their advantage.

Their May meeting will include a vote on letting in homosexual scouts, see, which is nice, except the proposal also says gay scout leaders will still be specifically excluded. The message to gay scouts: "You are welcome here, come in. Learn with us. Until you are an adult. Then you are too filthy and untrustworthy to be around children, so fuck off, pervert." A scout is kind, after all.

Not really part of the news dump, but still got lost amidst all the bombing shenanigans: You probably saw the beginning of this story when it first happened Wednesday night — big mushroom cloud over the Sonic, people explaining that West, Texas, was not actually in west Texas, then there was- OH HEY LOOK BOSTON.

Well, 14 people died that night, including nine first-responders — a number that's bounced around considerably. At one point, it was 11 firefighters dead, at another point there were 60 people missing, and this afternoon CNN reported the chemical plant was alive and had been successfully arrested. Turns out the place hadn't had an OSHA inspection since Reagan was president, which sounds bad until you consider that OSHA is actually three guys and a clipboard who are actually comparatively efficient in inspecting businesses once every 190 years.

So there's this thing where if you trust a bunch of your information to a company, and then that company gives your information to some secretive government organization, you can sue them, because that is really shitty of them to do. CISPA will grant those companies immunity for all that stuff, which means when the NSA comes knocking and wants to know what you've been googling, or what everybody's been googling, or whatever weird thing they might be asking for, they can just have it, no warrant required.

Oh, and all those terms of service agreements you signed, that said they'd never share your data with anyone? Those wouldn't count anymore either. There was an amendment to change this part, but it was killed on Wednesday. There are other amendments too, but we're not allowed to know about them because the mark-up sessions are held in secret.

And nobody gave a shit. Fridays!