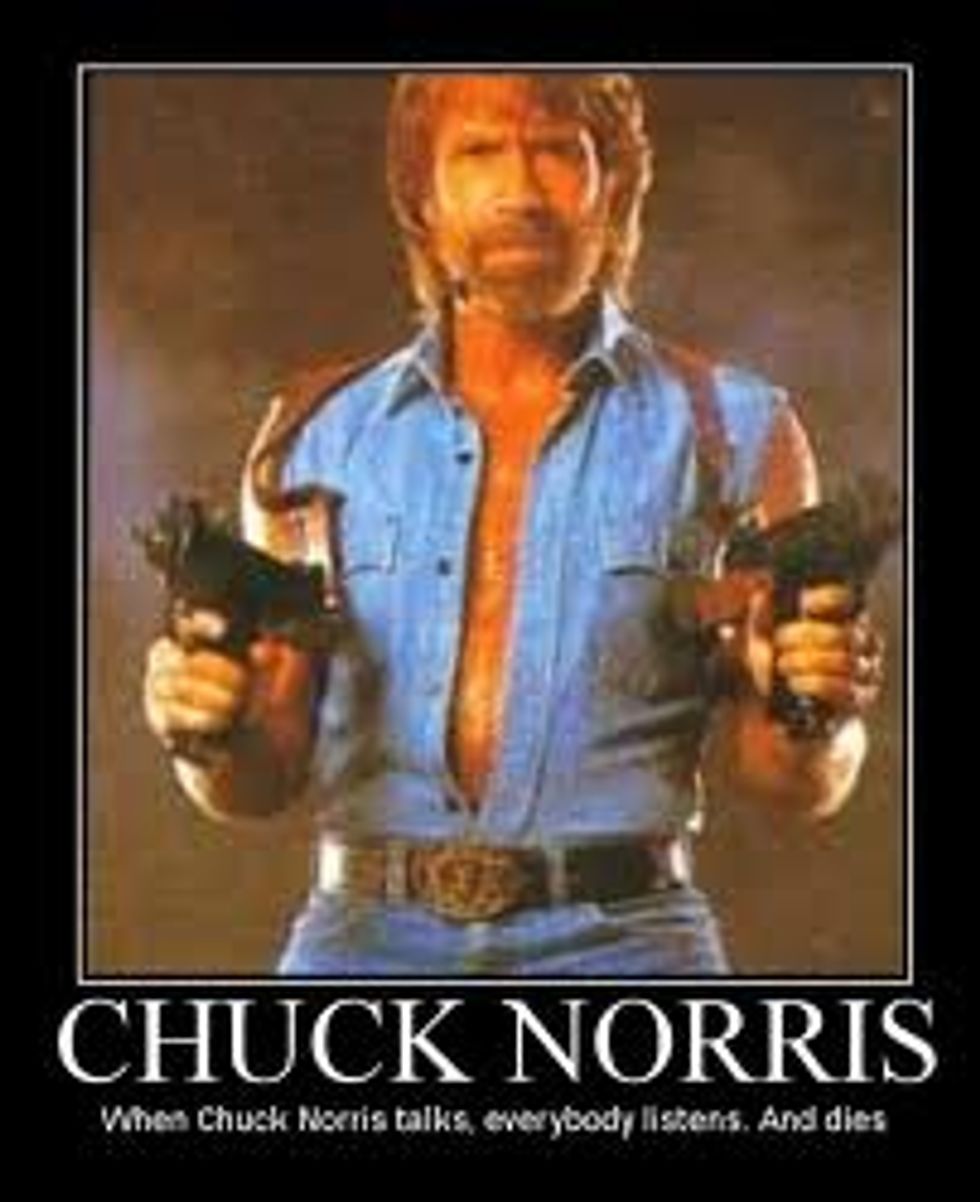 Oh, whoops, did Your Wonkette just get itself"targeted" by DHS? Well, IT IS WORTH IT, to bring you these important stories from the nation's cheese factory, the late great state of Wisconsin. First up! Chuck Norris sees your Bill Clinton, raises you a Chuck Norris!

Wisconsin Democrats, Washington elite and insiders, and liberal special interests have joined together to fight for the recall of Gov. Scott Walker in Wisconsin in Tuesday’s election. But last Friday, when I saw them also send in the big guns, former President Bill Clinton himself, against Gov. Walker, I knew I had to enter the ring, too.

But will he fight Bill Clinton with mixed martial arts, or with the power of his self-regard?

Next! Wonkette's dearest and most illiterate friends at Americaphile have some dumb video they would like you to see. (Probably don't bother clicking through, as we have embedded all their ALL CAPS ALL BOLD for you, below.

THIS MINISTRY IS HAPPY AND PROUD TO ENDORSE GOVERNOR SCOTT WALKER IN THIS VICIOUS AND TREASONOUS RECALL ELECTION INSTIGATED BY UNIONS, WHO ARE NOTHING MORE THAN AGENTS OF PIAPS!!!!!

PRO-AMERICANS IN WISCONSIN MUST RETAIN THEIR PRESENT GOVERNOR WHO HAS DONE SO MUCH TO FIGHT COMMUNISM AND THUGGERY!!!!!!

So that is a thing that exists.

Third up! According to David Schuster, Scott Walker is going to prison forever and ever, maybe, someday (but not within the two months preceding an election, because then an indictment would look "politically motivated").

Despite copious reporting, especially in the Milwaukee Journal Sentinel, about the Milwaukee County district attorney's probe of alleged violations when Walker was county executive -- including a secret email network maintained by his staff for the purpose of conducting illegal campaign activity on county time, the theft of funds intended for the widows and orphans of Iraq War veterans, and possible favorable treatment of campaign donors seeking public contracts, not much has been written about the FBI probe.

Finally, hug a deer, vote Scott Walker. As previously reported, Walker's newly appointed deer czar would like to turn Wisconsin's public land management over to private hands, because it is a fiscally conservative thing that Republicans love, selling off public amenities to the lowest bidder.