Your Senate Sunday: Anybody But Oklahoma Sen. James Lankford (R - The Worst) 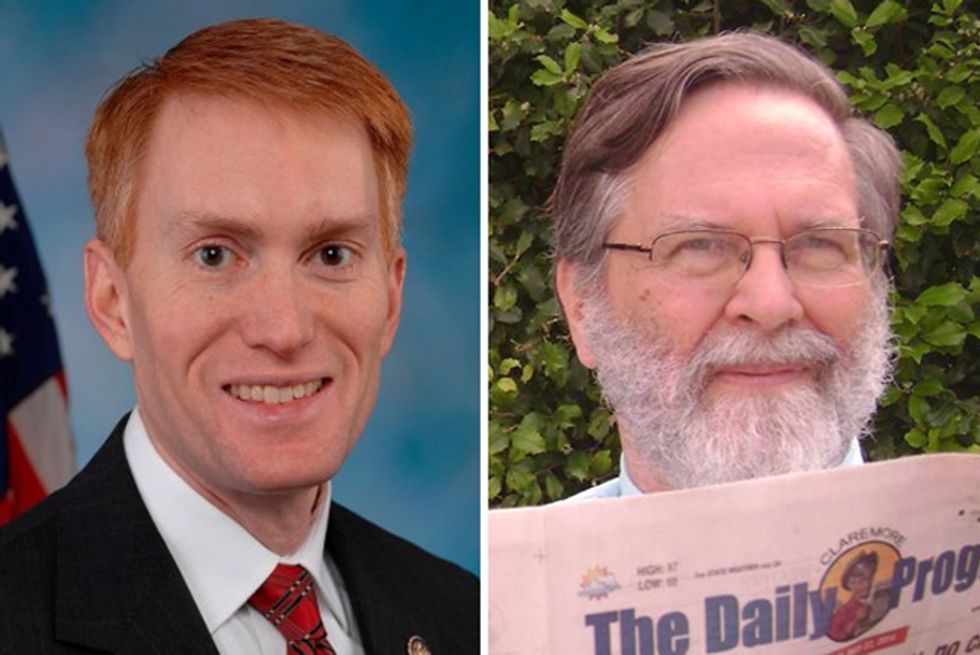 Which of these men would YOU rather hug?

We are going to bet you had no idea the great state of Oklahoma has a primary election coming up Tuesday. That is why Yr Dok Zoom is here to keep you on top of things. And is it ever going to be a barn burner! Sure, the Republican and Democratic candidates for U.S. Senate are already set, and the state's presidential primary was back on March 1, but there's one hell of a fight between the two candidates for the Libertarian nomination, Dax Ewbank and Robert T. Murphy. Grab the popcorn and get a sitter for the kids, this one could go right down to the wire.

Oh, we are just joking you! Nobody actually cares about the Libertarian primary, including apparently one of the candidates, Mr. Murphy, who hasn't even bothered with a campaign website for his Senate run. Good to see a realist!

James Lankford Is Your New Senator, Oklahoma, Congratulations He Is Terrible

So let's talk about the incumbent, James Lankford, who from a cosmic perspective is simultaneously meaningless and one of the worst wastes of Star Stuff Carl Sagan never met. If exploding stars billions of years ago could have known even the tiniest bit of their constituent atoms would one day be used in this guy, they might not have bothered. Or they'd have forwarded an apology. Lankford was elected to the Senate in 2014 to fill out the remaining term of retiring Sen. Tom Coburn, the guy whose final act as a U.S. Senator was to block a bill to prevent veterans' suicides. You'd think anyone replacing that weapons-grade numpty would have to be an improvement, but we should never misunderestimate the creative awfulness of Oklahoma Republicans, who elevated Lankford from Terrible Congressman to Terrible Senator.

There are many terrible things to be said about Sen. Lankford, and the fact that he can't count to three barely even ranks among them. Around Wonkette, he is especially infamous for being the first Republican to blame the Sandy Hook massacre on Welfare Moms Doing Fraud. You see, at a town hall five weeks after an adult human being murdered 20 elementary school kids and six adults with a semiautomatic rifle, a lady asked Lankford -- still in the House at the time -- what we can do about all the mood-altering drugs being prescribed to children, which clearly caused this shooting. This is where we remind you again that the shooter was an adult, and that whatever may have been prescribed to the children, it doesn't attract bullets. Lankford wasn't satisfied stopping there, though: First he had to blame violent movies and video games, and then, reasonably enough, single mothers doing welfare fraud. You may wish to put some kind of cushion under your lower jaw before watching this idiot.

Lady: My question is regarding the guns and is Washington at all aware of the psychotropic drugs that these children are taking? I guarantee it 100 percent that’s our big problem [...]

Lankford: I agree with that. I think there’s a bunch of issues that, quite frankly, most liberals are afraid to talk about. Where are we on all the violent movies? Where are we on all the violent video games? Where are we as a culture? We've disconnected from a lot of those things. Where are we on all those psychiatric drugs? We’ve overmedicated kids. Quite frankly some of the overmedication of those kids are because welfare moms want to get additional benefits and if they can put them on SSI through maintenance drugs, they can also put them on Social Security disability and they get a separate check. That is wrong on every single level. Not only is it fraudulent to the government, but it also tells a kid with great potential, “Don’t try: you’re disabled.” That's wrong, so we've got to fix that.

So that is why the mass shootings happen: women overmedicating their kids for that sweet Social Security fraud money. Has the FBI looked into this in Orlando? Lankford was only repeating a popular rightwing myth that goes back at least as far as 1995, when Molly Ivins gave Newt Gingrich hell for saying largely the same thing. So with an intellectual pedigree like that, it should be no surprise Lankford then went on to the Senate, even though Sarah Palin supported his Republican primary opponent.

So, what does Lankford have going for him, apart from saying all sorts of dumb/wrong/dubious stuff that teabaggers simply love? For one thing, he's a Baptist minister, and he's remarkably well-liked. Also, he ran a youth camp for the Baptist General Convention of Oklahoma for ages; one of our Wonkette Operatives in Oklahoma tells us in an email,

Lankford was the head of Falls Creek (the vacation Bible school summer camp every Baptist kid in Oklahoma is sent to for a week) for like 20 years. So just about every voter knows him from Falls Creek or sent their kid to him ... Because of the Baptist vote Lankford is untouchable. I firmly believe he could run as a Dem, socialist, whatever, and win. Also I've never heard anyone who voted for him express any kind of disagreement with him.

Not surprisingly, Lankford's top source of campaign contributions is the oil and gas industry, and it should go without saying that he's a favorite of Koch Industries, too.

So, who's in a position to beat this ginger-haired snollygoster whose face brings to mind a chicken laying razorblades? Good question! We wish the answer weren't "probably nobody, but we can hope!"

The official Democratic nominee is Mike Workman, who looks remarkably like one of our favorite college professors. We bet he looks like one of your favorite profs, too. He's a retired teacher who's run twice for Oklahoma Labor Commissioner, unsuccessfully -- which is a shame because what would be better than a labor commissioner named "Workman"? You gotta like a guy whose Facebook profile pic shows him with a statue of ur-populist Will Rogers. And you have to be a tad concerned for the prospects of a candidate whose campaign website is his Facebook page. We figured we'd ask our other Oklahoma Wonkette Operative, Commie Mom Donna Schoenkopf, about Workman. She says he's a "sweetheart":

A genuine bleeding heart liberal, kind of an FDR Democrat, doesn't have the $$ for much of a campaign ... He has come down to our little St. Patrick's Day Fundraiser 3 times, and that's a real haul. I would love to have him as our Senator and he's kind of a non-professional kinda politician.

There Will Be Blood: Oklahoma Democrats Will Fight Where They Stand

Seriously, if you haven't read Yr Editrix's 2014 piece on Oklahoma Democrats, which takes us inside that fundraiser, you need to correct that. If you're new to Wonkette, it's a mandatory part of the citizenship test. If you're a longtime reader, go read it again and remind yourself what awesome tough people Oklahoma liberals are.

Workman's campaign issues are all in the right place: he's for income equality, a $15 minimum wage, expanding the Affordable Care Act with the goal of eventual universal coverage, comprehensive immigration reform including a path to citizenship, and automatic voter registration. He's unapologetically pro-choice and in favor of common sense gun laws, although in Oklahoma he might get farther by advocating the sale of assault rifles to fetuses.

Despite Oklahoma's being among the reddest of red states, Workman is optimistic about 2016 because Republicans have that pathological liar at the top of the ticket:

“Once we have broken the straight ticket voting,” he said, “Our state senate nominees, our state rep nominees, people running for county clerks, sheriffs and down the ballot are going to have a better chance.”

The uncanny Robert MurphyBut what of that white-hot Libertarian primary coming up Tuesday? Should voters go with Dax Ewbank, who may or may not be a character from "Star Trek: Deep Space Nine," or with Robert Murphy, who doesn't have a campaign website at all and looks unnervingly like Sam Waterston? Happily, Murphy, who lost his 2014 run for Congress when he got 1.4 percent of the vote, has sort of settled the question by telling his supporters -- if any -- to vote for Ewbank, since Johnson's been appointed co-chair of Gary Johnson's presidential campaign in Oklahoma, and he needs to "concentrate on getting Gary Johnson 2.5 percent so we can stay on the ballot in Oklahoma." So there you go.

That leaves Ewbank, who is a total Libertarian when it comes to business and guns, but also bills himself as a "Pro-Life Libertarian." He doesn't exactly say what he'd do about abortion, but take heart, he only wants to limit abortions "to the smallest number humanly possible without creating a police state around women’s bodies, or interfering with their healthcare, or creating a black market for abortion." Here's a crazy notion: you could make contraception and sex education widely available and leave the decision of abortion up to women. You're welcome.

In addition to the big winner of the Libertarian primary, the November ballot will include two independents, Mark Beard, a roofing contractor who got a whopping 3.2 percent in the 2014 primary against Lankford, and might not do as well this year. Commie Mom's discreet assessment: "Kinda crazy, I think." He has a Facebook pagewith nothing on it. There's also Sean Braddy, a Bernie Sanders guy, who's that extremely rare thing, an atheist running for office in Oklahoma. His big issues are income inequality, criminal justice reform, and universal healthcare. Our clandestine Wonkette Operative in Oklahoma says Braddy "Looked interesting, but had a huge progressive event planned called the 'progressive stirring' but cancelled it. My guess from lack of interest. Will draw the greens and some far left Dems." Still, nice to see an independent who isn't a foaming-at-the-mouth crazy. Not that we mind them either, they keep things interesting.

Want to support Mike Workman? Checks can be sent to Workman For Oklahoma, 5862 S. Pittsburg Ave., Tulsa, OK 74135. His Facebook page says an online donation link is coming soon. If Sean Braddy's more to your taste, his donation link is right here. And if you'd like to support Yr Wonkette's countdown of all the U.S. Senate races (we're almost halfway through!) you can throw your filthy Ameros in our tip jar here.