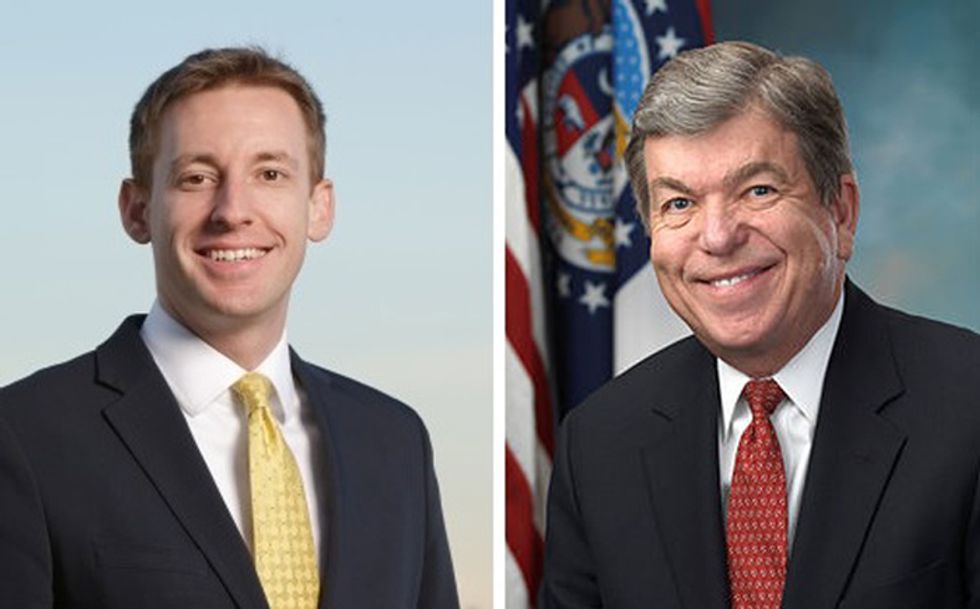 Roy Blunt (r) has kind of a creepy smile

Our weekly flyby of the nation's senate races takes us this week to Missouri, where people like their guns a hell of a lot -- they just got rid of the requirement for a permit for concealed carry, in fact. And even with voter ID laws falling to court challenges all over, the Republican-majority legislature nonetheless passed a brand-new voter ID law via a veto override, too. The next logical step, of course, is to require people to have a gun in order to vote.

So in a state that red, what does a Democrat do to have at least a fighting chance of winning a U. S. Senate seat? If that Democrat is Secretary of State Jason Kander, an Afghanistan war veteran, making an ad like this might help:

Unlike so many ads where politicians show off their Second Amendment bona fides by shooting something with a gun (and damn you, Joe Manchin, for starting the whole silly trend), this ad features Kander assembling an AR-15 while blindfolded, touting his pro-gun record when he was in the state lege, and adding that despite all his love of neat boomsticks, he also favors "background checks, so that terrorists can't get their hands on one of these." Then, as a little mic drop, he adds he'd like to see incumbent Republican Roy Blunt demonstrate similar familiarity with a semiautomatic rifle. It's macho as hell and completely meaningless as a policy challenge (though we won't be surprised at all when Missouri adopts it as a method for runoff elections). But it underlines the point -- as WaPo says, the "metallic clank of each part falling into place accentuates his argument" -- that one can be pro-gun and pro-safety. And did we mention butch as anything?

Kander is polling well enough against Blunt that the Democratic Senatorial Campaign Committee is throwing $1.5 million at his campaign in hopes that Blunt's can be one of the five -- ideally more -- seats needed to flip the Senate to a Democratic majority (yes, yes, and if we have a Vice President Kaine, the Dems only need to pick up four seats. But more is better). And for the first time this election year, the Kansas City Star notes,

So besides liking guns a whole bunch but not being beholden to the NRA, who is this Jason Kander guy? He's got sort of a dream biography for a red-state Democrat:

Kander worked as an attorney and is a Second Lieutenant/Instructor in the United States Army Reserve. He served as a Military Intelligence Officer in the United States Army, Afghanistan from 2006-2007, and was a Political Science Instructor at the University of Missouri-Kansas City. He earned his J.D. from Georgetown Law School and B.A. in political science from American University.

His campaign website's "Meet Jason Kander" page (which has has a scrolling design that's kind of vertigo-inducing) emphasizes his ability to work with both parties to "balance the budget each year without raising taxes and took on both parties to pass the first major ethics reform in almost 20 years," enhancing his don't-be-scared-of-the-Democrat credibility. His Issues page, not surprisingly, leads with his military service and his support for military members and vets. He also supports an equal pay law, paid family leave, and -- euphemistically, because remember, red state -- "has consistently fought against attempts by the government to interfere with the personal healthcare decisions of women in Missouri." Not that he actually had much chance of stopping the Republican-dominated lege from passing a 72-hour waiting period for abortions any damn way, but the more pro-choice senators we have in D.C., the better.

Missouri Democrat Wants To Treat Gun Sales Like Abortions. Where Does The Wand Go?

Missouri's abortion laws are so restrictive, you may recall, that a Democratic legislator, Stacey Newman, proposed a bill last year that would require gun sales to be treated like abortions: sure, it's a constitutional right, but why not have a 3-day waiting period, be lectured on the medical risks of having a gun, tour a trauma center, and read a pamphlet about "peaceful and nonviolent conflict resolution" in order to get a gun, too? We don't know whether Kander took a position on Ms. Newman's proposal, but he does at least have an endorsement from the Missouri chapter of NARAL Pro-Choice.

And then there's the incumbent, Roy Blunt, who is not related to the funny Southern writer who's often on Wait Wait, Don't Tell Me, and who in the May 1982 Atlantic wrote the definitive article about why chickens are funny, but it's not online. Also, the funny one spells his name differently. The Senatorial Roy Blunt, who's seeking a second term after having been in the House from 1997 to 2010, is kind of a douche, actually. For instance, in his 2010 run, he made his opposition to the so-called "Ground Zero Mosque" -- which was neither a mosque nor at Ground Zero -- a central issue, which logically enough led to a dumb TV ad in which the smoking ruins of the World Trade Center are a backdrop for audio of his opponent, Robin Carnahan, betraying America by saying she didn't think a mosque in New York City was any of Missouri's business, and worse, that she thought religion shouldn't be used as an issue to divide people:

Blunt got so much flak for suggesting a vote for Carnahan was equivalent to endorsing 9/11 that he pulled the ad after one day, replacing the image with a photo juxtaposing Carnahan and President Obama, who stood in just as well for "Muslim Terrorists" as the smoking ruins of the WTC. Blunt was a guy who, while still in the House, made a point of saying he wouldn't make an issue of Barack Obama's birth certificate, but also pointed out that he, Roy Blunt, could produce his own birth certificate on a moment's notice. Also, remember how the "Ground Zero Mosque" sort of vanished as a matter of national concern after the elections?

Farther back, in 2006, Blunt was one of several Republicans who dutifully returned all the campaign contributions from Jack Abramoff, even though of course they were sure the contributions were legal at the time, and were simply astonished to find they'd taken money from a criminal. He also winked and nodded a former aide into a lobbying job.

More recently, in 2012, Blunt tried to save Jesus America by pushing a "religious freedom" amendment to free insurance companies from covering contraception if doing so would offend the insurance company's God. The Senate somehow killed that one. In 2015, Blunt knew why student debt was such a problem: College students live it up too much, with their boards-and-cinderblock bookshelves and their dorm rooms with actual internet. He also opposed debt forgiveness for students ripped off by the for-profit ripoff factories run by Corinthian Colleges, which is quite the coincidence considering the generous contributions he received from the for-profit college industry. Oh, and Blunt was among those charming R Senators who voted against Hurricane Sandy relief, while insisting that FEMA cover all the costs of disaster relief following the tornadoes that hit Joplin, Missouri, in 2011. We'll give him this much: he plays to type.

Blunt's's running some peachy campaign ads, too, like this one quoting Kander out of context to suggest he loves him some pinkos and commies:

Kander is getting support from a god-knows-who's-paying for it outside group called "Vote Vets," calling Blunt a chickenhawk who doesn't love The Troops:

Nothing is certain in this wacky political year; Missouri is likely to go for Donald Trump for president, but it's far from clear Roy Blunt will be returning to the Senate next January -- especially since he has contenders from the Libertarian and the wackaloon Constitution Parties to pull purist votes away from him. Ballotpedia lists Missouri's Senate election as a "race to watch," and the Rothenberg & Gonzales Political Report/Roll Call prediction has been downgraded from "Republican Favored" to "Leans Republican." In a quirky bit of polling, PPP found that if they asked respondents about whether they favored increasing the minimum wage, voters were far more likely to say they supported Kander, so he may want to mention that rather often. Metric assloads of super-PAC money are flowing into the race on both sides, and it's expected to be a squeaker come November.

They might just have to decide it by seeing who can more quickly assemble a gun blindfolded.

Want to help push a red state Senate seat into the "D" column? Jason Kander's ActBlue contribution page is right here. And as always, Yr Wonkette's effort to cover all 34 of this year's Senate races will be greatly helped by dropping a few pence (but not mike) into the coffee and internet fund. Thanks!