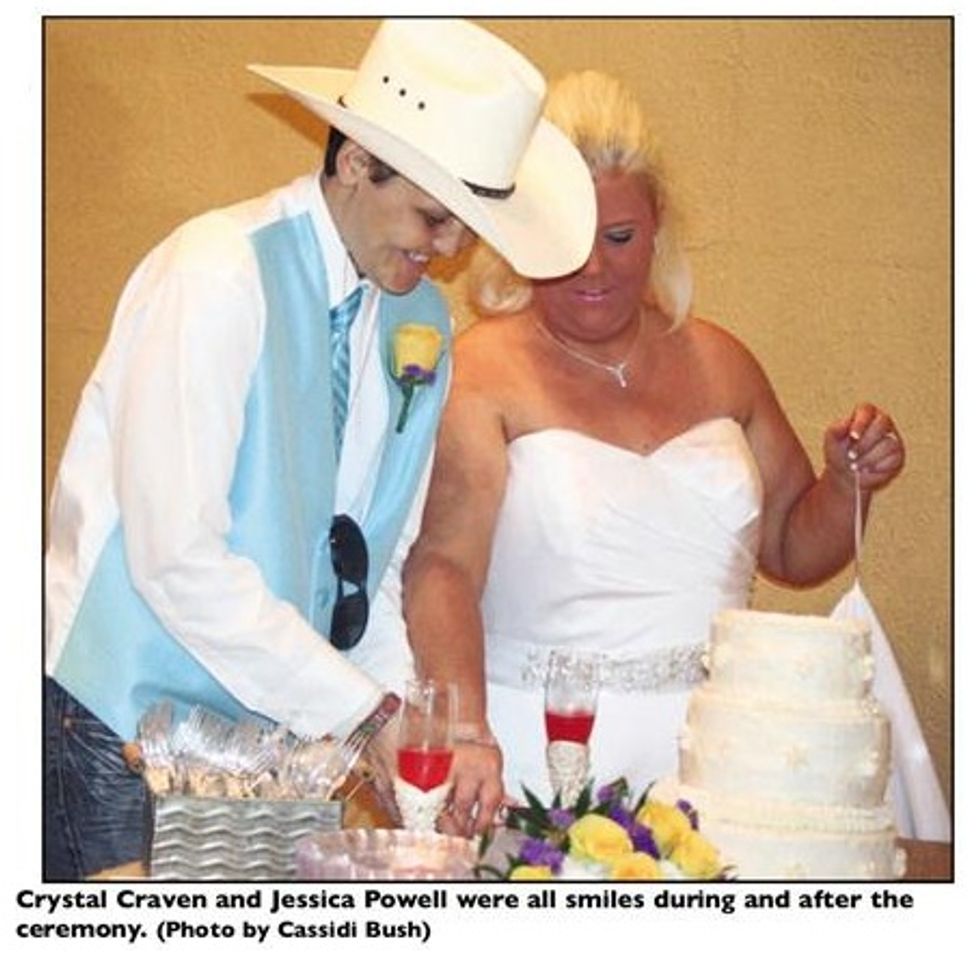 Meet newlyweds Crystal Craven and Jessica Powell of Laurel, Mississippi, who exchanged vows earlier this month. Ms. Craven has brain cancer, and doctors and staff who've been treating her were among those who attended the small ceremony. While the State of Mississippi doesn't recognize same-sex unions, the local paper, the tri-weekly Laurel Leader-Call, covered the ceremony, headlining the story "HISTORIC WEDDING" [their site is swamped today, so here's a screencap -- DokZ] and noting that it was the county's first same-sex wedding. Not surprisingly, some in the small community were outraged -- not at the cosmic injustice of two people finding love when one of them may be near death, but at the Very Idea of two ladies getting married. Angry messages and phone calls to the paper followed, and fifteen people noisily cancelled their subscriptions.

At this point, had you not seen the headline, you might be wondering where the "nice-time" part of this story comes in, but here it is: Jim Cegielski, the Leader Call's owner, published an editorial telling people that the job of a newspaper is to cover news, and since a gay marriage in rural Mississippi is definitely news, how about all y'all just get a life?

Cegielski's editorial is the sort of thing that you might find in a Frank Capra movie, if Frank Capra made movies that included gay marriage and Facebook:

We shouldn't have to defend every decision we make here at the Leader-Call...However, the intense reaction to our gay wedding front page story, which led to a deluge of hate calls, letters, e-mails, Facebook posts, soundoffs and random cross stares thrown in my direction, warrants some sort of response. So here it is.

We were well aware that the majority of people in Jones County are not in favor of gay marriage. However, any decent newspaper with a backbone can not base decisions on whether to cover a story based on whether the story will make people angry.

The job of a community newspaper is not pretending something didn't take place or ignoring it because it will upset people. No, our job is to inform readers what is going on in our town and let them make their own judgments. That is exactly what we did with the wedding story. Our reporter heard about the wedding, attended it, interviewed some of the participants and wrote a news story. If there had been protestors at the wedding, we would have covered that the exact same way … but there weren't any. We never said it was a good thing or a bad thing, we simply did our job by telling people what took place.

I took the bulk of the irate phone calls from people who called the paper to complain. Most of the complaints seem to revolve around the headline, "Historic Wedding," and the fact that we chose to put the story on the front page. My answer to the "Historic Wedding" headline is pretty simple. You don't have like something for it to be historic.

The holocaust, bombing of Pearl Harbor and the Black Sox scandal are all historic. I'm in no way comparing the downtown wedding of two females to any of those events (even though some of you made it quite clear that you think gay marriage is much worse).

We have stories about child molesters, murders and all kinds of vicious, barbaric acts of evil committed by heinous criminals on our front page and yet we never receive a call from anyone saying 'I don't need my children reading this.' Never. Ever. However, a story about two women exchanging marriage vows and we get swamped with people worried about their children.

We're just sad that Jimmy Stewart isn't available to play Mr. Cegielski. And there's even more to like about the guy; not only did he call bullshit on people complaining about the story, he pretty much resurrected the paper itself after it closed last spring.

So let's have a nice huzzah for local journamalists who have some backbone, and let's have another for two ladies in love and facing a hell of challenge -- if this story were about a straight couple in similar circumstances, it would be a Hallmark made-for-TV movie.

[Yahoo / Leader-Call newspaper site flooded; link is to a screencap]