Your Wonkette Guide To the War On Christmas 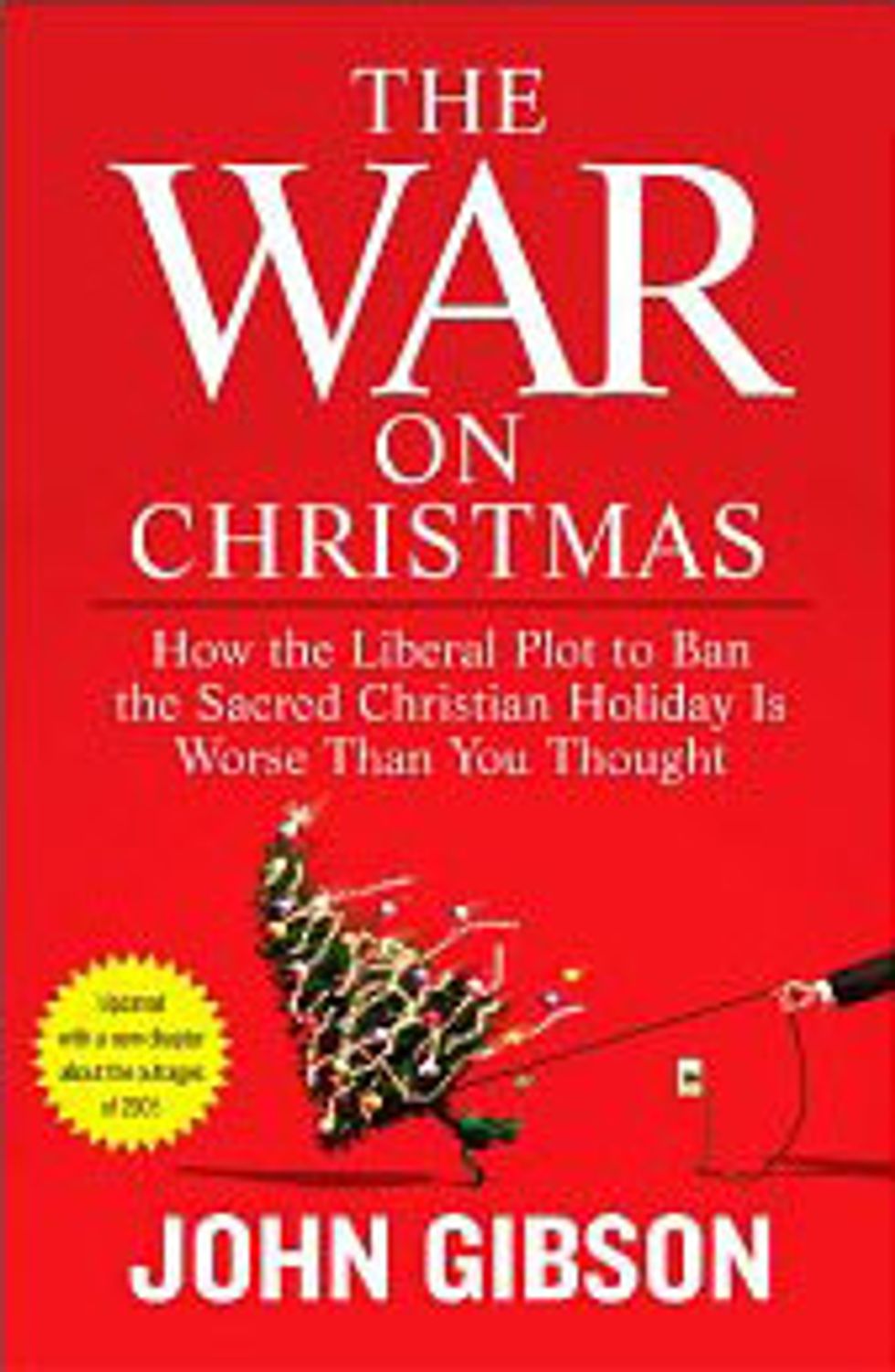 Christ-killers and Menorah fetishists, ACLU fascists and Kwanzaa-celebrating racists, liberals and Nazis, gather 'round the Christmas fire! Normally at Christmastime, your reviewer would want to read aloud some classics of the season, but this year we must focus on what’s truly important and enduring: books by furious wingnuts that denounce the damnable War on Christmas. According to two incisive pieces of War on Christmas/Christians lit, you liberal hooligans are setting reindeer traps and torching Nativity scenes left and right. But then again, even flying reindeer might be a liberal/Hitlerite plot. What?

If you want to understand the War on Christmas, it’s probably best to start with the book that (we think) first gave the world that winning phrase: John Gibson’s 2005 hippie bugle-blow The War on Christmas. With this book alone, it seems, former teevee/current radio chucklehead Gibson inaugurated the mainstream American right’s lone antiwar movement. Their program is something like “The ACLU won’t defend Nativity scenes in town squares, but they'd probably defend the right of some ‘artist’ to SMEAR DONKEY SHIT ON THE BABY JESUS!” As Gibson writes:

Often the first shots of the battle are fired in schools. Many schools have either already changed Christmas trees into friendship trees or giving trees or holiday trees, or are considering it. Almost everywhere a school district is limiting what Christmas carols kids can sing or hear, or a district is considering it...

...almost everywhere school administrators have either disinvited Santa or are giving him sidelong glances of suspicion, and in some schools...the colors red and green are forbidden.

Gibson never specifies which schools are banning red and green. In all the journalistic sleuth-work he does in this book, he never once encounters a school that’s exiled Santa or forces kids to call Christmas trees “friendship trees.” Most of the school stories revolve around teachers and administrators not emphasizing religion in school Christmas celebrations, and trying to maintain some level of awareness that not every student in the U.S. public school system celebrates Christmas.

The rest of the book is bland complaining: An ambitious bureaucrat in Eugene, Oregon insists on Christmas trees being taken out of the town’s government buildings (he isn’t successful); an elementary school teacher asks a student not to proselytize to her classmates; a Bible-quoting school Santa is asked to hold back on religious talk during school hours; Coca-Cola replaces its iconic Santa adverts with those vile adorable polar bears.

Who is responsible for this actual War on Christmas, this napalming of candlelight services and mass starvation of mall Santas? According to Gibson:

...it’s not just liberal Jews...my Jewish son helped me research this book because he agrees that the war on Christmas has gone too far. The large number of foot soldiers waging the war on Christmas is in fact made up mostly of liberal white Christians, some of whom have Jewish-sounding names (Cohen, Horoschak) that could lead readers to a dangerous and very unfair conclusion...The wagers of this war on Christmas are a cabal of secularists, so-called humanists, trial lawyers, cultural relativists, and liberal, guilt-racked Christians---not just Jewish people.

Glad to have that cleared up, as it turns out this cabal is even more sinister than your reviewer originally thought. In her book The Criminalization of Christianity: Read This Book Before It Becomes Illegal! (actual title), Janet Folger makes the argument that, just as there are three Sundays in Advent, there are three kinds of Hitler:

1) People who celebrate holidays other than Christmas around the Winter Solstice.

2) People who are courteous to people who celebrate holidays other than Christmas around the Winter Solstice.

Hitler turned Christmas and Easter into pagan holidays. Christmas became a pagan festival, and at least for the SS troops, its date was changed to December 21, the date of the winter solstice. Carols and nativity plays were banned from schools in 1938, and the name of Christmas was changed to Yuletide.

The fact that this is 100% bullshit doesn’t keep our Janet from drawing parallels between the condition of Jews in the Third Reich and the much-warred-upon Christians of early 21st-century America. Of the dastardly anti-Christmas forces, Folger writes:

Historically, after ridicule, demonization, censorship, and discrimination comes persecution. In Germany, the call came for a final solution. There are lots of ways to implement a final solution. Gas chambers are one. Lions are another.

So there you have it. American Christians will soon be marched off to die in concentration camps (or fed to lions) because, uh, members of a town council somewhere decided not to decorate their Christmas cookies with icing-pictures of the Virgin Mary, or something?

Oh wait, one more thing. Not only did Hitler never ban Christmas or any other Christian festival, but Germany’s churches (Protestant and Catholic) backed him and the whole Nazi death parade every step of the way. There were scattered rebel pastors and believers, like Dietrich Bonhoeffer (memorialized in a fine, sort-of Christmas poem, incidentally), but for the most part Germans viewed the Nazis as good Christian folk. Wait, does this mean the baby Jesus was secretly a Nazi? So confusing, history...

The Criminalization of Christianity: Read This Book Before It Becomes Illegal! by Janet Folger, Multnomah Books, 288 pages, $13.59