Yr Wonkette recently shared a very important email alerting us and other members of the "#ObamaMedia" to the Real True Truth about John Kerry's "bicycle accident" in France -- it's all fake! Kerry was actually the victim of an attempted assassination by ISIS!

There were certain factual issues with the email, sent by one "danielking4" at redacted.redacted, not the least of which is that hashtags in an email serve #NoUsefulFunction. In any case, we soon heard from the author of the email in our comments section, under the username "A.K. Dan":

Hey Rebecca, Sweetheart (Wonkette), although you didn't give me a 'heads up' about slamming me in your little 'Communist dribble', I'm letting you know that I just mentioned YOU on my lovely website www ak47world.com

We didn't realize we were expected to inform every idiot we write about that we intend to write about them being idiots; for one thing, we assume Jeb Bush and Bryan Fischer would tire of the constant notifications. Just in case we didn't click the linky in the comment, he also sent another email to Yr Editrix, to be sure she understood that he had a "tip" for her. Get it? Get it? A TIP!:

And hey Rebecca, your boy, 'Barry-the-Fairy' Obama must have been really worried about all the Russian Intelligence accusations, because today #TeamObama released a picture allegedly of Kerry in a Hospital room ?

Oh & thanks for making me even more 'noticed' by #TeamObama, because according to his FBI & Secret Service Goons, I'm supposedly trying to overthrow his corrupt regime !!!

Why just take a gander at my lovely website www.ak47world.com & be sure to scroll down to my 'bullets' & see my "Clinton AK47 Deal" page.

Oh, we get it! The hammer is his penis! Dan was Most Displeased at being barred from the Wonkette comments, which we don't allow anyway: "Wow, are you that much of a Coward that you're afraid to let me reply to your leftist screed against me ???"

Poor Dan -- he thought we were writing about him? Heck, he was merely the conduit from which the crazy flowed. We were far more interested in the idiotic Kerry conspiracy story than in the random loser who sent it. Sorry, Dan, you're no MAD JEWESS. 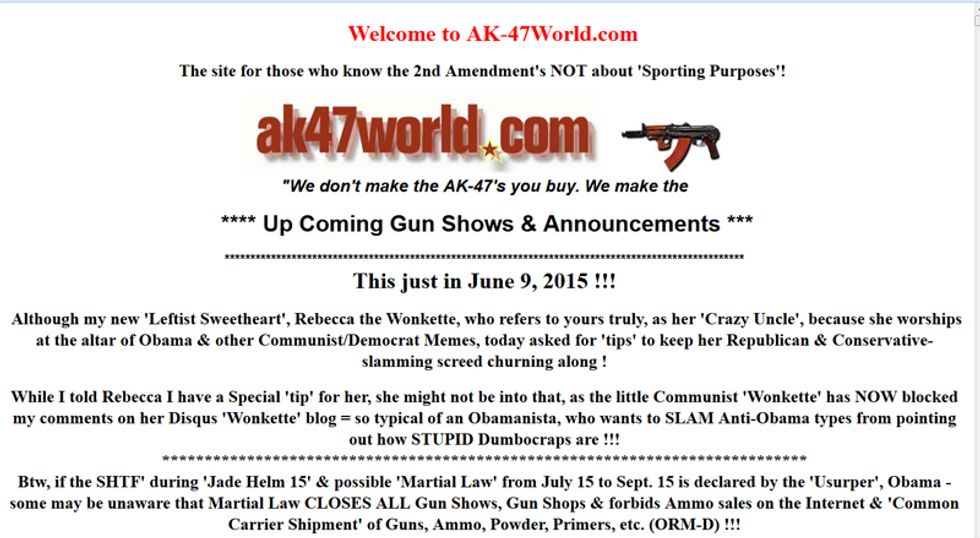 So, what does one find on AK47world.com? Certainly not any actual Kalashnikov rifles, because, Dan freely acknowledges, he is not a licensed firearms dealer: 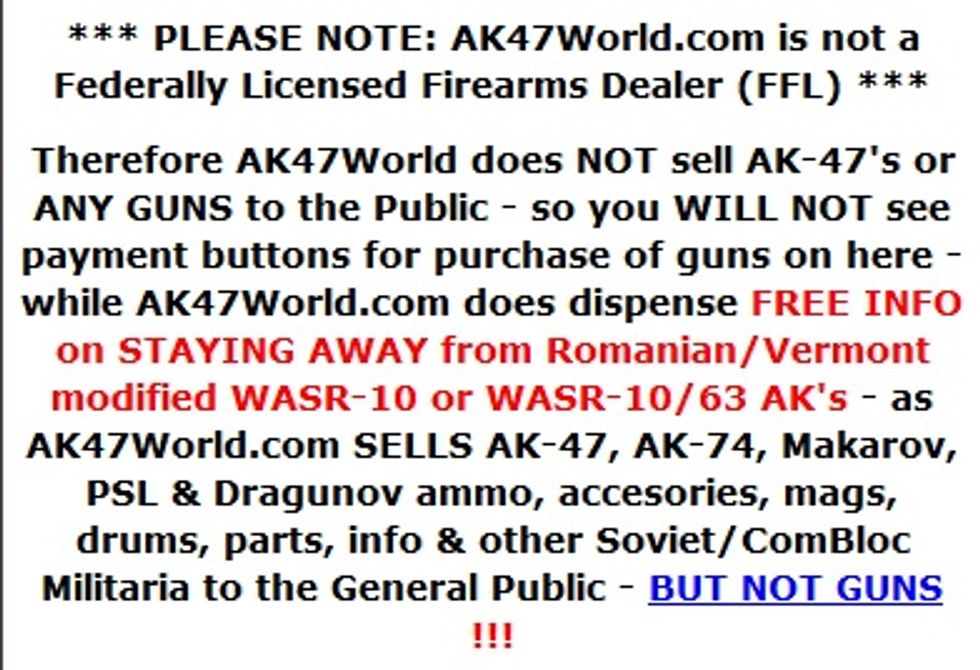 Not a licensed dealer? That actually makes us feel a whole lot better about the Bureau of Alcohol, Tobacco, Firearms, and Explosives and its licensure restrictions.

The main page has a metric shit-ton of ranting about the need to stock up on ammo and magazines before Operation Jade Helm results in martial law, and all of our guns are outlawed forever. There's also this important information -- sandwiched between offers for "New Russian 'POSP' '4 x 24mm' Dragunov Scope that AK47World SOLD OUT of for $149.95" and photos of a rocket-launching truck that would probably be "NEEDED for #JadeHelm15 RESISTANCE !!!" (again with the useless hashtags!): 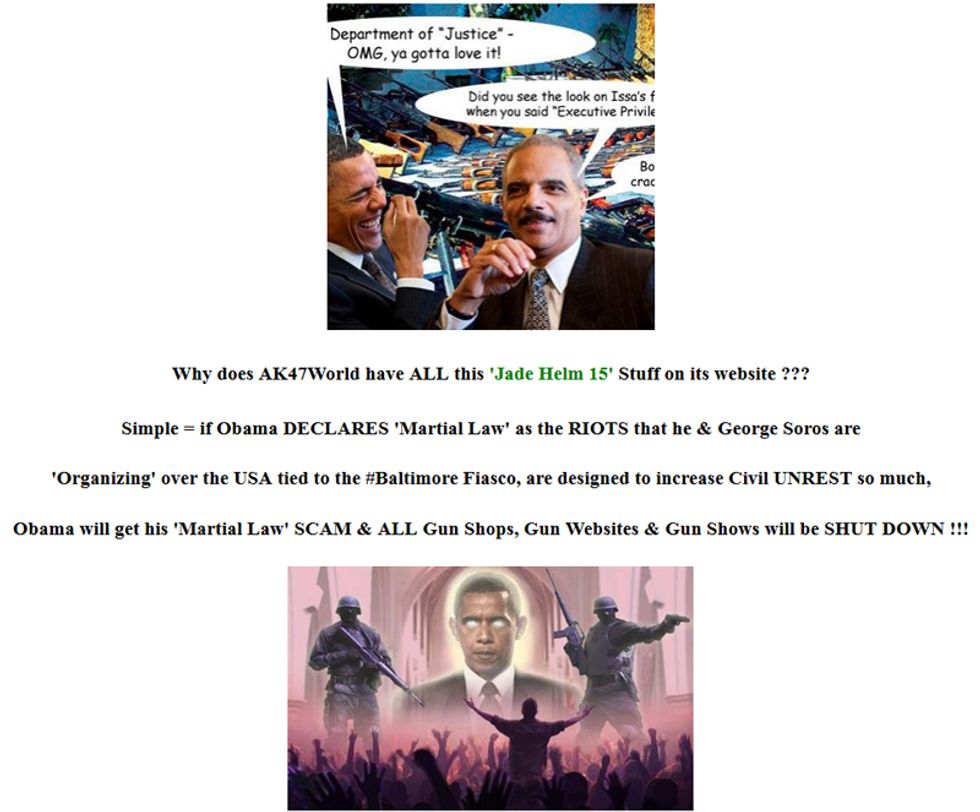 We're especially impressed with the hilarious cartoon of Obama and Eric Holder laughing at their defiance of Congress, which is funny even with a third of the word balloon gone.

We also checked out that "Clinton AK47 Deal" page Dan recommended, and HOO BOY, is it a steaming pile of word salad, with stories about Bill Clinton's secret arms deals with the Chinese, proof that Barack Obama's birth certificate is a fraud, and some very funny jokes about how they teach math in Chicago:

And the page just goes on and on forever, some of it in 3-point font. It makes Timecube.com look like a model of clarity, concision, and state of the art web design. We even scrolled to the very end, which, appropriately enough, rehashes the old Clinton Body Count claim that Commerce Secretary Ron Brown was "murdered with a .45 caliber slug in the back of his head in a 'staged' plane crash on a phony trade mission to war-torn Croatia!"

We'd give it a score of .67 TimeCubes: almost as wacky as the original, but the fact that you can apparently buy real gun parts there does decrease the overall score a bit. True madness should be completely free of utility.

He Can't Even Keep His Gays Straight

We were also delighted to see that Dan had given Yr Dok Zoom a thought on Twitter: 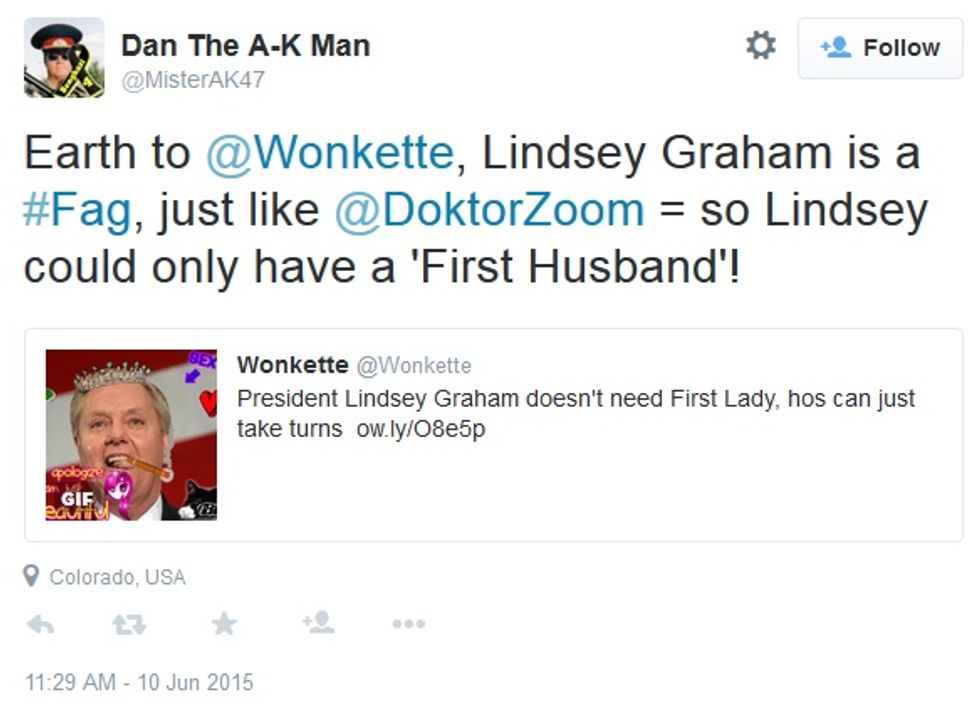 Jeez, we don't think Dan's even paying attention. We're flattered, but after we fired Snipy for the big GoFundMe money, Evan's the blog's sole Token Gay. Do your homework, man.

How Many Trump Crimes Will His Lawyers Confess To Today? (Impeachment Trial Liveblog, Day Whatever!)